Latest version of Nissan’s Z-car hits the road. Can it live up to the pedigree of its predecessors? 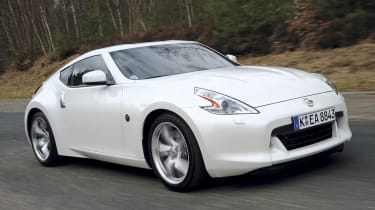 Nissan’s latest Z-car has a lot to live up to, and it delivers in every department. It has a more aggressive look than its predecessor, is faster and is even more involving to drive. At £33,695 for the well equipped range-topping Ultimate version we drove, it offers great value compared to its two-seater coupé rivals. After driving the manual version, we would pay the extra £1,400 for the seven-speed Tiptronic box. It’s definitely the better transmission of the two, and it returns better fuel economy, too.

It’s one of the world’s most recognisable sports car brands. And with its updated looks, lower weight and more powerful engine, the Nissan 370Z looks to be the best Z-car yet.

Every aspect of the newcomer has been changed over the 350Z it replaces, starting with the exterior. While it’s clearly inspired by the current car, the 370Z has a wheelbase that’s 100mm shorter and front and rear tracks that are 15mm and 55mm wider respectively. This means the 370Z has a stockier shape than its predecessor, while the flared rear wheelarches create an aggressive look.

Details include arrow shaped front and rear light clusters, while Z emblems double as side indicators. The Ultimate spec version we drove comes with 19-inch forged alloy wheels as standard.

Most impressive, though, is that despite all the changes, the new 370Z has managed to weigh in 32kg less than the 350Z. It’s helped largely by the extensive use of aluminium in the doors, rear hatch and bonnet which, along with the shorter wheelbase, helps the car’s agility.

Inside, build quality impresses. A combination of orange and black suede and leather lines the doors and seats, although the area around the gearlever still feels a bit cheap. There is much to admire about the 370Z’s interior, though. The driving position is lower and provides better support around the shoulders. Standard kit has increased, too. This range-topping Ultimate version has sat-nav and an eight-speaker Bose stereo as standard.

Nissan has also remedied the lack of boot space found in the 350Z. By increasing the 370Z’s chassis stiffness, the firm has been able to do away with the rear strut brace found in the last Z-car and create a 235-litre boot. There’s also a retractable cover to hide valuables from prying eyes.

Under the bonnet is an all-new 327bhp 3.7-litre V6 petrol engine. Our car came with Nissan’s new seven-speed Tiptronic auto, which is a £1,400 option. As well as a gearlever, the auto also adds a pair of steering wheel-mounted paddleshifters, similar to those found on the firm’s GT-R. The Tiptronic box adds only three-tenths of a second to the Z’s 0-62mph time, recording a figure of 5.6 seconds, it still feels full of pace and is extremely rewarding to use.

The 370Z also comes with Nissan’s new Synchro Rev Control technology on Ultimate and GT-spec models. This uses sensors in the pedals and gearbox to match engine revs as you shift down through the ratios, giving a similar sensation to race-style heel-and-toe changes. This not only ensures smoother downshifts, but also means you can carry more speed in corners, it’s much smoother shifting around town, too.

A lower ride height and stiffer suspension mean the newcomer handles confidently. The steering is full of feedback and highly responsive, and there are huge levels of grip in reserve. The downside to the stiffer suspension is the ride around town, which is far from smooth.

The 370Z is due to go on sale in July, and it’s undoubtedly an improvement over the 350Z. Throw in a starting price of £27,000, and you will have a hard time trying to find a more enjoyable, better looking and performing sports car for the money.

Rival: Audi TTS S tronic
At £34,840, the TTS is more expensive than the top-spec 370Z. Start adding options, and the cost will quickly escalate further, but for the extra money you get a smoother, more refined sports car. The TTS also has better fuel economy and lower emissions too.