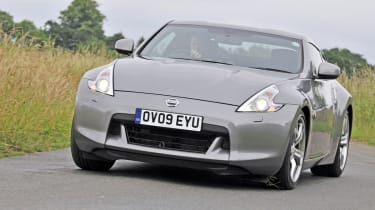 A price of £33,000 sounds a lot, yet when you compare the new Z-car to a Porsche Cayman with a similar spec, you’re saving more than £10,000. The Nissan isn’t as polished dynamically as the Porsche, but the tuneful exhausts, taut styling and muscular V6 will leave you with a bigger grin. As good as the seven-speed auto box is, though, the 370Z would get five stars with the Rev Control manual set-up.

It’s the Nissan that’s nipping at the GT-R’s heels! The 370Z is the latest in a long line of brawny Z-cars, and now we’ve let it flex its muscles in the UK.

Our model came with the optional seven-speed torque-converter auto box, which proved fast and involving. But we’d still recommend the six-speed manual with Nissan’s ingenious Syncro Rev Control – which automatically blips the throttle on downchanges.

Under the hood is a naturally aspirated 3.7-litre V6 – a simply remarkable engine that’s both smooth and savage.

Classic cues such as the ‘Z’ badge on the wings and the upswept line of the rear window are joined by arrowhead-shaped headlights. However, the 19-inch alloy wheels on our GT-spec car created a fidgety ride and increased road roar.

The steering is really well weighted, loading up significantly in corners and offering detailed feedback.

Plus, as the rear-wheel-drive newcomer weighs 32kg less than the 350Z, and features a shorter wheelbase, it takes bends with even more relish.

Rival: BMW Z4 The new Z4 is both refined and versatile. With its folding hard-top and adaptable suspension, it’s the sports car for any mood, and the range-topping 35i is blisteringly quick.