Is the latest Z-car the ultimate long-distance companion? We put it to the test by piling on the miles on a driving holiday... 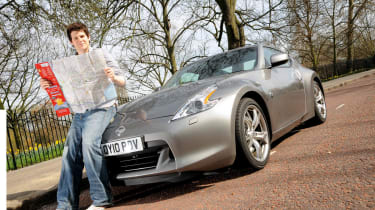 There's nothing better than a road trip. So when my new long-term Nissan 370Z turned up ahead of a few days’ holiday, I wasted no time in getting out the map of France – and booking the car’s place on a ferry!

The latest Z is not only more practical than its predecessor, the 350Z, it’s also meant to be easier to live with. So I thought I’d put that to the test with a mini-tour of northern France, taking in Lille before heading over to the west coast and the resort of Le Touquet.

And with just under 300 miles showing on the odometer, it was an ideal way to gently run in the 324bhp 3.7-litre V6 as well.

Loading up the boot highlighted the Z’s extra luggage space. By moving the rear strut brace, Nissan has freed up more room – so much so that you can now get two small cases inside and some squashy bags in between.

It’s still not what you’d call huge, but with our GT model’s optional luggage net, plus a handy cover to keep things private, it’s a leap forward.

The same can be said of the 370Z’s looks. The old car was a real hit on the high street and the new one turned plenty of heads in the queue for the ferry at Dover.

I like the cabin, too. It’s a pity there’s still no reach adjust for the steering, but gone are the scratchy plastics, replaced by a dashboard and centre console constructed from quality materials.

In addition, our car has a brilliant sat-nav system, which offers a clear display and flawless instructions – whether in the UK or in France. It also warns of upcoming speed cameras.

It’s a testament to the Z’s sports seats and good ride that, after leaving my flat in north London at 8am, I arrived in Lille at 2pm feeling pretty fresh. A long sixth gear ensures the big V6 is quiet at high speed, although the fat tyres make a racket. Even after only half a day at the wheel, I was already a big fan of the Synchro Rev system, though, which blips the throttle on the downchange.

It’s a boon around town, where you’re often not braking hard enough to easily heel-and-toe. You can turn it off if you want, but to be honest, I’ve been enjoying it so much I’ve left it on.

I’ve been impressed by the handling so far – even though most of my holiday was spent cruising on A-roads, rather than on country lanes. If you want a scalpel-sharp sports car, the Z is probably not for you. It’s no Porsche Cayman – it’s much softer than that.

Yet it’s not lacking in talent, with lots of grip and throttle adjustability, and I’m looking forward to fully exploiting its rear-wheel-drive chassis.

I have a few concerns, though. Although the V6 has less than 1,000 miles on it right now, it still feels very tight, and while it’s got a decent bassy rumble at low revs, it doesn’t sound particularly sweet as the engine speed builds. Perhaps it will loosen up.

Secondly, even in gentle driving, the 370Z is thirsty – I managed to average only 26mpg on my French trip, and expect that to drop significantly now it’s back in stop-start London traffic. You can get 300 miles between fill-ups, though.

So far, then, I’m enjoying the 370Z. And with this road trip under its belt, I’m already planning a journey further afield.

“Like Sam, I’ve been pleasantly surprised by the 370Z’s long-distance abilities. On a trip to the Bruntingthorpe proving ground in Leicestershire, it was a comfortable companion. But you can’t suppress the hooligan in it for long! Once the road opens up, even the shortest burst of acceleration reminds you instantly what the Z family has really built its reputation on – raw, affordable performance. The latest Nissan has this in abundance.”Jack Rix- Motoring writer