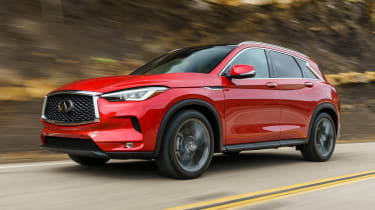 Infiniti’s long-awaited replacement for the QX50 is clearly a huge step forward over the old car, with a new platform, fresh look and a nifty new variable-compression engine under the bonnet. The performance is undeniably strong and the cabin is well designed, but the rigid ride and less-than-thrilling driving dynamics mean the new model will face an uphill battle against its European competitors. Infiniti still has its work cut out if it’s to tempt buyers away from the likes of the Audi Q5 and BMW X3.

It’s been three years since the QX50 disappeared from Infiniti’s showrooms in the UK, and now a new version is poised to go on sale. It’ll land in America first, with sales in Europe following in about 12 months.

Infiniti’s new 2.0-litre four-cylinder Variable-Compression Turbo (VC-T) engine is under the bonnet, which we’ve already sampled in an early QX50 prototype. However, this is our first chance to see just how it behaves in what is virtually the finalised production car.

The QX50 has undergone a complete transformation, with an all-new platform underpinning a clean-sheet design. 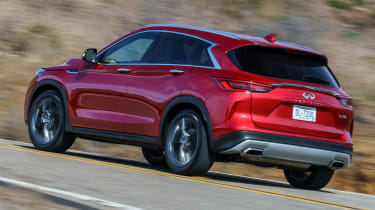 Unlike its predecessor, which was based on the rear-drive G-series saloon, the new QX50 uses a transverse engine with either front or four-wheel drive. This makes for a radical change of proportions compared with the old model, although the view out over the bonnet looks faintly familiar.

What really sets the Infiniti QX50 apart is its petrol-fuelled VC-T engine, the first variable-compression-ratio unit to enter volume production. The engine uses a motor-actuated linkage attached to the crankshaft to change the length of the piston stroke by up to 1.2mm, enough to vary the compression ratio from 8:1 to 14:1, and displacement from 1,970cc to 1,997cc. The engine runs in a low-compression setting for maximum power; when demands are low it switches to high-compression mode for better economy. Infiniti is so confident in the engine that it plans to make it the only option worldwide.

It certainly packs a punch. The output of the 2.0-litre turbo four-cylinder is 268bhp and 380Nm, which is slightly down from the 325bhp and 362Nm of the previous model’s petrol V6. But it’s more efficient and almost as quick, delivering 0-62mph in 6.7 seconds. 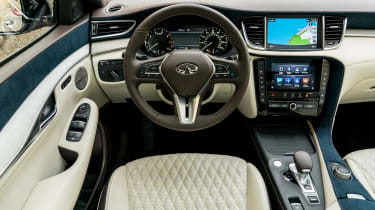 The variable-compression function is undetectable, save for a display on the dashboard that shows the engine switching to high-power mode with anything more than a gentle prod of the accelerator. Pick up is strong and immediate, while the ‘stepped’ operation of the CVT makes it easy to forget it’s not a geared transmission.

European fuel economy figures have yet to be announced, but Infiniti is expecting a 32.4mpg rating in the US, a 35 per cent improvement over the old model. Our test drive comprised city driving, aggressive hilly roads and relaxed motorway cruising, and we averaged a disappointing 24.3mpg. We’ll have to wait for a full test on UK roads to determine if the VC-T engine will really deliver what it promises.

And what of the rest of the drive? The QX50 is competent, but not particularly thrilling. Grip is good, but the optional steer-by-wire system offers little in the way of feedback, and the suspension jostled us over the smaller bumps and floated over big ones. We can only hope that European QX50s are set up better.

Interior quality is good, and the basic layout is similar to that of the Q50; the upper of the two screens displays a moving map and the lower is used for infotainment and climate controls. 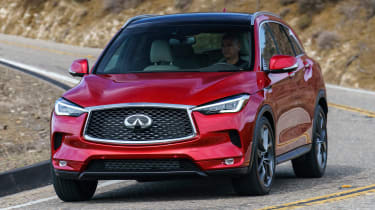 The new platform has an emphasis on interior space, so there are major improvements to both the rear-seat and luggage-carrying areas.

The QX50 offers more legroom in the rear seats than the larger Lexus RX does, although there isn’t much space for your feet under the low-mounted front seats.

Boot capacity is 895 litres (US measurement), expandable to 1,048 litres by sliding the rear seats forward, and 1,699 litres by folding them down.