The Infiniti G saloon is designed to challenge the BMW 3 Series and Audi A4, but it only comes with a thirsty 3.7-litre petrol engine 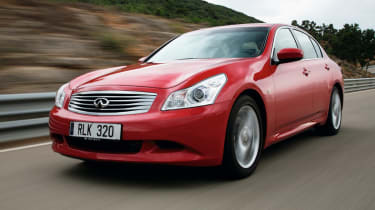 Infiniti is Nissan’s luxury division, much like Lexus is to Toyota. The smallest model range is the G-series, which comes as a saloon, coupe and convertible. The saloon is designed as an alternative to German rivals such as the BMW 3 Series, Audi A4 and Mercedes C-Class, as well as the Lexus IS. Infiniti is targeting the premium end of the compact executive sector, so all cars come loaded with standard equipment. There’s only one model available – the G37, which is powered by a 3.7-litre V6 that’s also found in the Nissan 370Z sports car. But this is the car’s major stumbling block: the engine is thirsty and inefficient, so the G37 can’t really compete with the class leaders.

The Infiniti G37 aims to be a sporty choice in the compact executive market, and while it’s fairly responsive, it can’t keep pace with the class-leading BMW 3 Series, or even the Audi A4 or Mercedes C-Class in corners. The 3.7-litre V6 packs a punch, though, giving the G37 a 0-62mph time of 5.8 seconds. If you want to take it easy, the G37 is good, too, as the luxury cabin is quiet and refined at motorway speeds. The G37x adds four-wheel drive, which improves traction.

There’s no diesel option, so the Infiniti loses out to its rivals for running costs. The 3.7-litre V6 petrol returns only 27mpg and emissions of 246g/km, so fill-ups and tax will be costly. One good point of the G37 is that you get lots of equipment for your money. Even the entry-level G37 GT comes with climate control, parking sensors, Bluetooth, electric heated front seats, leather, auto lights and wipers and a seven-speaker stereo with music hard drive.

The Infiniti G37 was designed primarily for the US market, and the unusual styling certainly stands out on UK roads. It has a smooth nose and smart grille, a curving roof line and smooth rear with a short bootlid. Inside, there’s room for four in the luxury cabin, but there are hard plastics on the dashboard and build quality isn’t quite on a par with the best from the German manufacturers.

The four-door G37 is a comfortable saloon, with decent room for four inside, although it’s only really average for the class. Boot space could be better, though, as the 450-litre capacity is 30 litres behind the BMW 3 Series and Audi A4, while the narrow boot opening makes access difficult.

The Infiniti G37 is new to the UK, but Nissan has been producing Infiniti models in Japan since 1989, and the range shares mechanical parts with other Nissan models. The engine, for example, is also used in the Nissan 370Z, as is the sat-nav system and multifunction steering wheel. So there should be no concerns about reliability, while Infiniti’s customer service is of the highest standards. Infiniti will collect and return your car for servicing, which is a good thing, because the firm currently only has a handful of dealerships across the country. 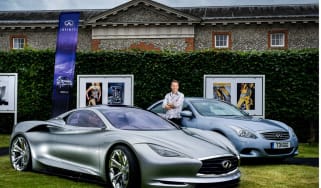 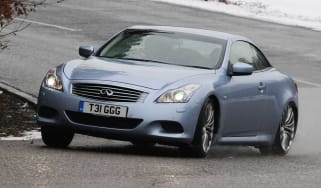 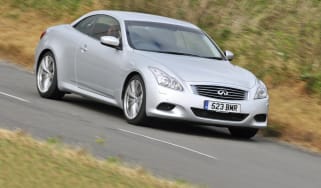 Lift-off at last for new high-spec hard-top.
Skip to HeaderSkip to Content