Can the cool new Infiniti Q60 coupe give the niche brand the boost it needs? 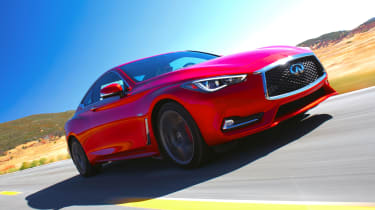 The Q60 is a stylish coupé. As well as a powerful twin-turbo V6, four-wheel drive and adaptive dampers, this Sport model has a host of safety kit including radar cruise control and lane assist. However, there isn’t much fun to be had behind the wheel, as the electronic aids rob you of any real involvement. Ultimately, it’s not enough to challenge the German establishment, and will ensure Infiniti stays a niche choice.

Infiniti has had a tough time in the UK until recently. The Q30 hatch and QX30 crossover have spiced up a range that comprised tired SUVs and executive saloons. Now it’s the turn of the sleek Q60 coupé, and we’ve driven it in the US for the first time to see if it has what it takes to finally take Europe by storm.

The Q60 sits low and has a sleek, conventional four-seater coupé silhouette. But it’s decorated with more unusual embellishments, like the extravagant C-pillar, wide grille and sculpted flanks. These give the car a very distinctive appearance, making it more than a match for Mercedes’ classy C-Class Coupé.

At first glance, the inside looks a little busy; despite having two touchscreen displays there are a lot of buttons to contend with, while lower down there’s an additional dial that controls the map. But everything is well finished with high-quality materials, and the seats are plush, with plenty of support and decent bolstering. The range of movement from the front seats and steering wheel means it’s easy to find a suitable driving position, too. 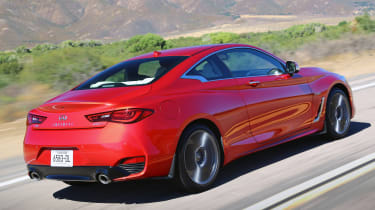 The 3.0-litre twin-turbocharged V6 in our Q60S Sport delivers a healthy 400bhp. That’s enough to outshine rivals like the 362bhp Mercedes-AMG C 43, the 349bhp Audi S5 and 321bhp BMW 440i. But the Infiniti doesn’t shout about its performance; despite doing 0-62mph in 5.0 seconds, its exhaust is quiet and there are no unnecessary and contrived pops and crackles on the overrun. Instead the engine revs cleanly and makes a tuneful, if slightly synthetic, noise as it does so.

The Q60S will return a claimed 31mpg, so it isn’t especially frugal – but that’s the price you pay for 400bhp. CO2 emissions of 208g/km are particularly high, too. Should you want a more cost-effective alternative to the Q60S Sport, the entry-level model gets a 2.0-litre four-cylinder turbo and will set you back around £9,000 less. It’s more economical, with Infiniti claiming 41.5mpg.

Like Audi, BMW and Mercedes rivals, this car also has a traditional torque converter automatic gearbox. But while the German contenders never leave you wishing for a double-clutch auto, the Q60’s box is slow to react, the changes are lethargic and it’s ultimately frustrating. Although the ratios are low, that doesn’t translate into any sort of immediacy because of the transmission’s lazy character. Still, what the auto lacks in sportiness, it gains in refinement. 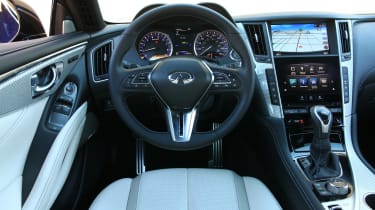 The well mannered drivetrain complements the lack of wind and tyre noise, creating a quiet cabin. This means the Q60S never feels that fast. It isn’t slow, however, surreptitiously building pace only to surprise you with how fast you’re going.

The coupé is well equipped to deal with swift driving, though. Adaptive dampers keep the body in-check and help to reduce roll, while also ensuring a comfortable edge. Sadly the Infiniti doesn’t ride in the same luxurious fashion established by the drivetrain and interior. It never properly settles unless on a perfectly smooth road. 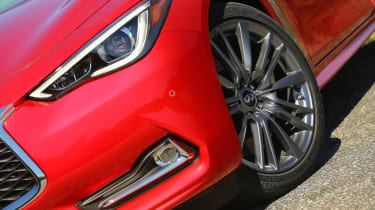 Like many of its rivals, the Q60S has four-wheel drive. This system drives the rear axle most of the time, but a centre differential can distribute torque to the front axle if necessary. It also features brake-enabled torque vectoring, and when combined with the all-wheel drive, the car feels very nimble.

Sadly, the fly-by-wire steering doesn’t transmit enough information through the front tyres for you to gauge your corner entry speed intuitively. The Q60S responds resolutely to your inputs, though, following the path you set. Select the Sport+ driving mode and the electronic stability system slackens off, but it isn’t enough to make the car truly playful.