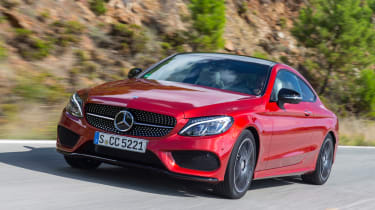 The new C-Class Coupé scales down all the glamour and style of the larger – and considerably more expensive – S-Class Coupé. It ditches the two-door saloon car look of its predecessor in favour of a more slippery shape. It’s nicely made and is arguably more stylish than the BMW 4 Series, plus it’s nearly on par with the BMW in the handling stakes. We just wish Mercedes called time on its gruff 2.1-litre diesel engine.

Drivers wanting some of the most expensive and ostentatious two-door coupés money can buy have often flocked to Mercedes. Its S-Class Coupé, launched last year, isn’t just the latest in a long line of vast and showy four-seater two-doors, but it also offers some seriously cutting-edge technology, putting it up against more exotic names in the business like Bentley.

Yet while the S-Class has the panache  to tempt the super-rich to open their cheque books, those further down the pecking order have to look elsewhere. Step up the new C-Class Coupé, which aims to offer a taste of the £100,000 S-Class Coupé in a far more reasonably priced package.

It even looks like a scaled-down version of its big brother. The new two-door C-Class moves away from the previous generation’s approach to a small coupé. While the old car looked a little too much like a two-door version of the C-Class saloon, the  new one is very much a separate entity. Largely speaking, it is – because the Coupé shares only its front wings and  bonnet with the latest four-door.

It’s 95mm longer than the old two-door, as well as being 40mm wider, all in an effort to make the newcomer look more sleek and flowing, like a traditional coupé. The wheelbase is 80mm longer than the old C-Class Coupe: 60mm of that comes between the firewall and the front axle, giving the Coupé that long-bonnet look normally reserved for sports cars. 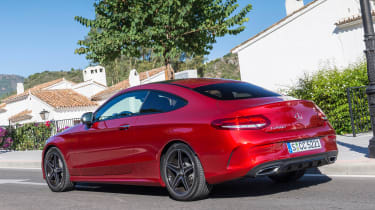 View the C-Class from side on, and  you’ll see it at its best. Dominated by an exaggerated shoulder line, the roofline arches down to the curvy rear end – and it’s here where the car closely resembles the S-Class Coupé. The horizontal tail-light clusters and exhausts pushed to the outer edges of the rear bumper play a clever trick on the eyes and emphasise the car’s width.

Just like its big brother, the C-Class is  very sensitive to colour and trim. Our test model’s Hyacinth Red Metallic finish (a costly £845 option) enhanced the long and sleek stance, but the standard 18-inch wheels look too small in the arches, and make the car seem slightly bloated from the rear three-quarter angle. A 19-inch multispoke AMG wheel option looks better, although it adds another £595 to the price.

• Which is the best premium car brand?

Mercedes has tried to keep the recipe simple with the Coupé, and in the UK only offers two trim levels, four engines and three gearboxes. Sport spec brings plenty of equipment, including 17-inch alloys, LED headlights and tail-lamps, parking sensors and a reversing camera. There’s also sat-nav, active park assist, a collision avoiding autonomous braking system and imitation leather with heated front sport seats. Move up to our model’s AMG Line trim, and you get a little extra bling with a bodykit, larger 18-inch wheels, a front grille with ‘chrome pins’ and 15mm lower sports suspension. 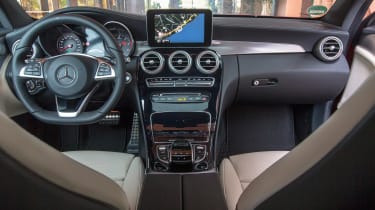 There’s a six-speed manual box, as well as Mercedes’ seven and nine-speed autos. And naturally, topping the range are Mercedes-AMG versions of the C-Class Coupé, available in standard and S guises. A C 450 AMG Sport will follow, to plug the gap between the C 300 and the C 63. 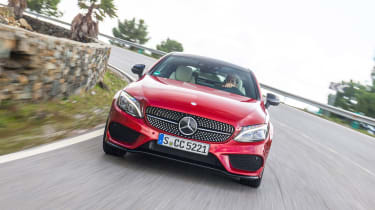 Apart from the new standard sports seats – which are comfortable and offer plenty of adjustment – the cabin is lifted straight out of the C-Class saloon and Estate. And that’s no bad thing as the design shows Mercedes is starting to get back to what it does best with interior ambience. It’s all nicely made, and as well as the flat-bottomed steering wheel, AMG Line cars feature black ash wood trim to give an extra bit of style.

The options list includes a number of packs: the £1,695 Premium pack adds a panoramic glass roof, keyless go, seat memory package and ambient lighting. For £2,995, and you can get a Burmester stereo with an eight-inch infotainment screen – but the display is just bigger, rather than easier to use; the 4 Series Coupé’s iDrive is more intuitive.

In the back, the two seats are mounted slightly inboard in a bid to give passengers sitting there a clearer view ahead. Head  and knee room could be tight for anyone over six foot tall, and while the boot is  well shaped, it’s 50 litres smaller than those of the 4 Series and ageing Audi A5. 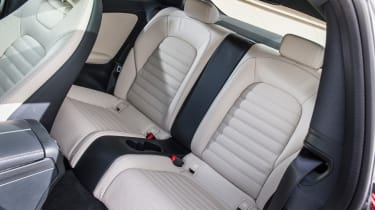 Our first drive was of the more powerful diesel, and it’s a mixed bag. Mercedes’ four-cylinder engine isn’t the best on the market, proving to be strained at high revs and coarse on tickover, but it does  offer decent punch – 201bhp and 500Nm  of torque translates into a 0-62mph time of 6.7 seconds. Fuel consumption stands at 67.3mpg while road tax equates to £30 a year thanks to CO2 emissions of 112g/km.

The 2.1-litre engine is flattered by the gearbox. Our car was fitted with the new nine-speed automatic, which flips between ratios quickly and really smoothly – although it’s best left to its own devices as it likes to change automatically even when you use the wheel-mounted paddles. 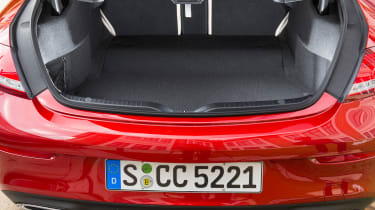 The steering itself has different software from the saloon, and it’s all the better for it because it’s weightier, quicker and delivers a bit more feedback. Our test car had the £895 Airmatic Agility package, which adds air-suspension and adaptive dampers. On all models there's an Agility Select function that allows you to choose from Eco, Comfort, Sport and Sport+ driving modes. On smooth Spanish roads, this enabled the C-Class Coupé to simply float over bumps – how it would deal with broken British roads remains to be seen. There was no chance to try a standard version with steel springs, and we’d guess the air-sprung car would struggle a bit in the same way the saloon does, but time will tell.

Whether the C-Class Coupé is more stylish than the 4 Series will ultimately come down to personal taste, although we feel it has more of a wow factor. Spec-for-spec the newcomer is a little more expensive, but add in handling that’s almost on par with the BMW’s, and the Mercedes looks the more tempting option for now at least.