The new Audi S5 Coupe offers plenty of performance, but is it any fun to drive? 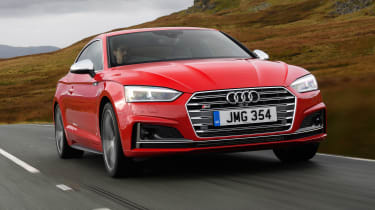 While the Audi S5 does all the rational things you’d expect from a sporty coupe very well, it doesn’t deliver the involvement you might want when the mood takes you. There’s no denying its impressive performance, but the way it delivers this power isn’t the most exciting. It’s beautifully built, there’s lots of hi-tech kit available and with four-wheel drive it’ll be reassuring year round. The S5 just might not be as much fun as some rear driven rivals.

Like the recently released S4 saloon and estate, the £47,000 Audi S5 coupe goes back to what a fast Audi originally was. The RS models above this second-tier S performance range are the in-your-face power-crazed monsters – and they look it. Now, the S line-up caters for the discerning owner wanting more discreet performance.

And on that subject, you can’t deny the S5 exudes understated confidence, with only a few styling cues to differentiate it from lesser S Line models. These include the S5-specific single-frame chrome grille, satin finish wing mirrors and subtly different front and rear bumpers with a matt diffuser insert. 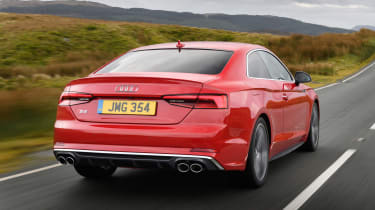 While the styling isn’t revolutionary compared to its predecessor, there have been some more significant changes to the S5 under the skin. The old 3.0-litre supercharged V6 has been replaced by a turbocharged 3.0-litre unit of the same configuration that produces 349bhp and a healthy 500Nm of torque.

There’s some clever tech involved, too. The turbo is placed inside the cylinder banks to improve response, and there’s certainly nothing wrong with the way it pulls. Throttle response is decent in Dynamic mode, and the engine delivers a strong turn of speed, accelerating the S5 from 0-62mph in 4.7 seconds.

With £900 adaptive dampers on our car the S5 rides relatively well in Dynamic mode given its 19-inch wheels, with fairly taut body control. Drop it into Comfort and the experience relaxes, with the suspension softening sufficiently to round the edges off bumps with more finesse. 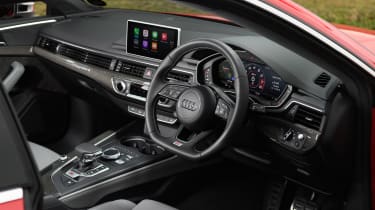 However, no matter what mode you’re in, the overriding impression of the S5 is that it feels a little lifeless. Sure, it has to cover both bases of being a comfortable cruiser and offering performance on demand, but the result is a clinical, removed feeling to the way the S5 goes about its business.

Unlike the rest of the A5 range, the S5 uses a conventional eight-speed auto rather than a seven-speed S tronic dual clutch. And while it’s smooth most of the time and sharp to shift up in manual mode, downshifts can be laboured.

The steering’s quick, and with four-wheel drive you can lean on the S5’s chassis in corners, but it doesn’t feel very adjustable. The linear engine and oh-so capable all-wheel drive system leave the car feeling a little flat from the driver’s seat – this is a 349bhp performance coupe, but it doesn’t engage you like a BMW 440i would.

Still, a 440i doesn’t boast features like Audi’s 12.3-inch Virtual Cockpit (a £250 option), or as slick a cabin design. The widescreen digital dial pack is teamed with an 8.3-inch infotainment display that includes Audi’s Navigation Plus system as standard, so there’s plenty of scope to choose what you show on the two screens. 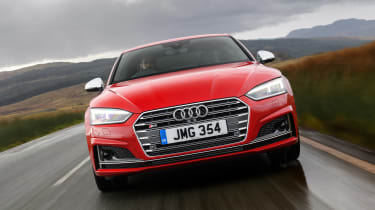 You can add practicality to the list of positives, too, as the S5 boasts the same 465-litre boot as the A5 it’s based on, which Audi claims is the best in its class.

Leg and headroom is acceptable in the rear, and it’s only a four-seater so even adults won’t be cramped for width. It’s spacious in the front despite a big centre console, and this makes the S5 feel upmarket, along with the nicely finished trim inlays and material quality you’d expect from a car costing twice as much.

It’ll even be relatively efficient if you aren’t too heavy with your right foot. Audi claims it’ll return 38.2mpg and emit 170g/km CO2, so given the straight-line speed on offer, £210 road tax seems relatively reasonable.