The latest S4 Avant is exactly what a fast Audi estate should be: understated, refined and deceptively fast. It’s not the most dynamic proposition in the class – for that you’ll need to look to Jaguar or BMW – but it mixes these character traits with a high quality interior, a good level of kit and a decent ride and handling balance. It might have lost a little in some areas, but it’s definitely gained back more in others.

While we await the announcement of a new RS model, fast Audi estate fans in the junior executive sector must make do with the Audi S4 Avant. Which isn’t such a hardship, as the S4 Avant combines all the long-established and highly desirable attributes of the fast German load-lugger – continent-munching performance, combined with premium quality and comfort.

The Audi S4 Avant isn’t alone, of course, and its key rivals are the BMW 340i and the Mercedes C43, both of which offer stonking performance and are more engaging to drive. As is often the case, the Audi’s quattro 4x4 system costs its driver ‘feel’, and the unarguable gains in traction must be offset against that lower fun factor. But you could easily argue that most S4 owners blasting up and down the UK motorways are having too much fun to notice.

Outright performance is the headline act, and the S4 Avant for sale today is predictably faster than its predecessor. Thanks to a mighty 349bhp turbocharged V6 under its bonnet, aided and abetted by an eight-speed auto and the aforementioned quattro system, the fast Audi can sprint to 62mph in just 4.9 seconds. 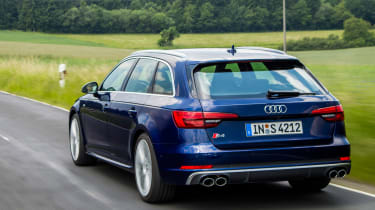 A meaty 500Nm of torque is delivered across a wide rev-range from just 1,3750rpm, which also helps the S4 to deliver the sort of crushing drive-ability that isn’t far off what you’d expect from an RS model. It’s significantly cheaper than any future RS version will be, too, and although still an expensive car there isn’t much that can match its breadth of capability of the money.

The engine is responsive low-down, although there is a little bit of turbo lag to contend with at low revs. It gives way smartly to the sort of linear thrust that makes the quattro system earn its keep, as the extraordinary traction makes sure you don’t spin away those valuable horses. The latest generation system can send as much as 85 percent of the engine’s power to the rear wheels too, but in spite of its impressive ability it doesn’t help the S4 Avant feel as nimble as a BMW 3 Series while cornering.

The turbocharged 3.0 TFSI unit emits a muted but creamy growl, treading the line between theatre and refinement, but leaning slightly more towards the latter. The gearbox contributes towards this too, as it slurs shifts nicely in auto mode and makes a good fist of quick changes using the manual paddles, even if it isn’t as fast as a dual clutch.

While it might have rivals like the BMW 340i beaten for straight-line performance, the Audi can’t match it for involvement from behind the wheel. The S4’s steering is light and quick, and with lots of grip to lean on you can be accurate with how you drive the car. 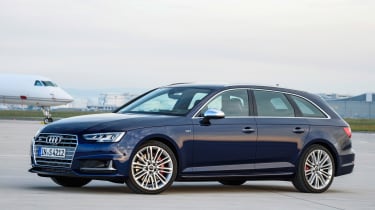 But the chassis feels less engaging than in competitors like the BMW. Our test car was fitted with Audi’s dynamic steering option, which on the S4 is better than previous systems, but it still isn’t brimming with feel.

It handles nicely, though, with the car braking an inside rear wheel to help turn-in. And with Audi’s optional Sport diff, featuring torque vectoring on the rear axle, it helps to give a slightly more rear-lead feel on the way out of corners.

The trade-off between ability on a back road and effortless cruising on the motorway is where the S4’s real appeal lies though – and with a 505-litre boot in estate form, you can add flexibility to that list.

Relatively modest 18-inch wheels are fitted as standard (19s are extra and fitted here), and with optional adaptive dampers the ride is supple and controlled in Comfort mode over all but the worst tarmac, offering a decent level of compliance despite the 23mm lower suspension compared to the regular A4.

As you’d expect, dynamic mode tightens up the dampers with tauter control, and while it limits body roll the S4 flows better in the softer setting, absorbing bumps with a more gentle edge to the chassis. 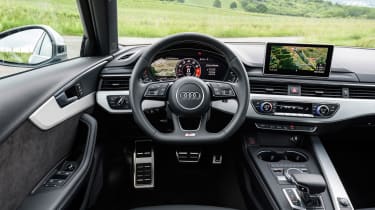 This level of refinement means you appreciate the exquisitely constructed interior all the more. Material quality is first class, while touches like Alcantara on the doors and the sports seats highlight the S4’s position in the range. With tech like Audi’s virtual cockpit widescreen digital display on offer – including a new sport mode here – there’s plenty of advanced technology that’d make the S4 effortless to live with.

The extra S-specific styling mods only add a few more muscular design features, including the gently swollen sills, quad tailpipes, bright mirrors and a small boot lip spoiler, so the S4 looks understated. You’ll need a keen eye to pick it out compared to a standard S line model, but for many this discreet look combined with easily accessible performance and practicality will be the attraction.

Claimed efficiency of 37.7mpg and 171g/km CO2 is also decent given the performance on offer, and while you might not hit these economy highs if you tap into the rich reserve of power from the V6, it’ll still be acceptably frugal on a cruise.