The Audi S4 is a compact executive car that will match many dedicated sports cars for pace, if not outright driving excitement 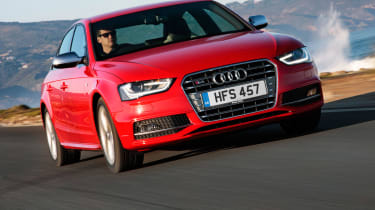 The Audi S4 sits at the top of the A4 range, and is a good deal cheaper than the more exotic RS4. It packs very impressive performance into a subtle, understated package. This model replaces the 4.2-litre naturally aspirated V8 engine of old with a more efficient 3.0-litre supercharged V6, and although the soundtrack isn't quite as entertaining, it offers almost the same performance with significantly improved fuel economy and CO2 emissions. If you like to get where you're going in a hurry, but without attracting a lot of attention (positive or negative), the rapid but unremarkable-looking S4 is an ideal choice.

The old 4.2-litre V8 Audi S4 packed tremendous power and acceleration, yet left the driver feeling disengaged from the driving experience. But this current model is an improvement. Despite the reduction in power (328bhp, down from 339bhp), the supercharged V6's near-instant throttle response means it feels (and is) just as fast as its predecessor. It doesn't sound quite as manic, but the V6 exhaust note has a pleasing character of its own. Quattro four-wheel-drive is standard, but the system does allow more power to the rear wheels most of the time, and the car is also available with a traditional six-speed manual gearbox, so driving purists won't be disappointed.

Audi claims a combined urban/motorway fuel economy figure of 29mpg for the S4, which is remarkable for a car that can hit 0-60mph in a shade over five seconds (though it won't achive both at the same time, of course). That's a 25 per cent improvement over the old V8 engine, with no equivalent reduction in performance. Emissions have been reduced, too, but the S4 still sits in the second highest road tax band. The S4 falls into Group 36 for insurance, so you annual policy will also take a sizeable bite out of your wallet.

The Audi A4 has never been about groundbreaking design innovation, and the latest model is no different, continuing the gradual evolution of the model's clean, handsome, well proportioned but relatively restrained lines. Even this high-performance variant doesn't do much to hint at the potential lurking under the bonnet, but you do get 18-inch alloy wheels, subtle 'S4' and 'V6T' badging, silver wing mirrors and tell-tale twin exhausts under the rear bumper. Up front, you'll find Audi's trademark LED daytime running lights: perhaps the only styling aspect of the S4 that could be considered over the top.

The whole point of a car like the Audi S4 is to combine performance and practicality, and there really are no compromises to be made if you need to use it as a family car. The S4 shares the regular A4's impressive head and legroom and generously sized 480-litre boot. The rear seats fold down for added flexibility, but buyers needing the ultimate in practicality might want to go for the Avant estate version. However, if you don't need to carry oversize the loads, the more upmarket-looking and slightly more efficient saloon is the best choice. Comfort and refinement are up there with the class leaders, too.

Build quality on modern Audis is second to none, and despite the huge amount of hi-tech hardware packed into the S4, problems are few and far between. The regular A4 finished 60th overall in our Driver Power 2012 survey, but its result was affected by factors other than reliability. Audi's legendary quattro four-wheel-drive system, along with electronic stability control, gives the driver plenty of confidence in tricky conditions, but should the worst happen, it's reassuring to know that the A4 was awarded the full five stars in the rigorous Euro NCAP crash test. 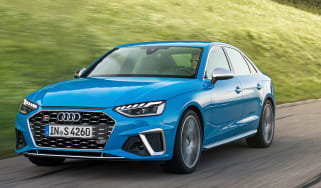 The New Audi S4 performance saloon has made the ostensibly unfashionable switch to diesel but could it be an inspired move on Audi's part?
Skip to HeaderSkip to Content