The new Audi S5 Sportback offers a combination of luxury and speed, but what's it like on the road?

Like its diesel-powered A5 sibling, the S5 Sportback is a luxurious, refined, fast and (relatively) frugal five-door coupe. It’s quattro all-wheel drive system gives it bags of poise and plenty of grip, but prevents it being the driver’s choice in this segment. An S4 is cheaper and more practical, but if style is a top priority, few will complain about the S5’s beautifully finished package.

Like the A5 Sportback, the S5 features many of the same cosmetic changes that differentiate the new model from its predecessor. It gets the same wider grille and LED headlights, as well an identically sculpted bonnet and sharp profile. The bumpers are slightly more aggressive than on the standard car, while the lower suspension gives the S5 a squatter stance. A set of 19-inch wheels and quad tailpipes complete the look. 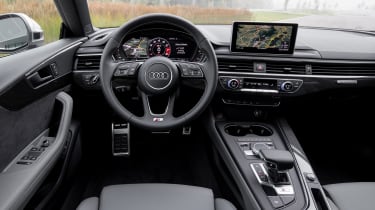 Inside, the S5 gains upgrades from the standard A5’s sumptuous cabin with Fine Nappa leather and ‘S super’ sports seats. It’s a glorious place to sit, with every surface covered in luxurious soft touch materials. All cars also get the brand’s MMI navigation plus with a three-year subscription to Audi Connect, while the brilliant Virtual Cockpit dials are a £250 option. In our opinion, that’s cash well spent.

It’s under that chiselled bonnet where the biggest changes take place, however. Gone is the old supercharged V6 – in favour of a more powerful and more economical turbocharged version.

Just as they did with the S5 Coupe, engineers have boosted power to 349bhp (up by 21bhp), while torque jumps from 440Nm to 500Nm. Before, that slug came in at 2,900rpm, but now it’s available from just 1,370rpm, making the S5 feel rapid in every gear – charging to the red line from incredibly low revs.

Speaking of gears, Audi has opted for an eight-speed torque converter auto in the S5 rather than the familiar dual-clutch setup found elsewhere in the range. You’d think this would hinder the Sportback’s progress, but it manages to slur changes with remarkable efficiency – switching cogs in an instant and never leaving you wanting. As before, you can take control using the steering wheel-mounted paddles, adding a greater degree of immersion in the driving experience.

The sports exhaust sounds particularly fruity, too. We’re told there’s no artificial sound augmentation – and under full throttle there’s a pleasing note from the rear. Bosses say they’ve fitted a device under the dashboard that improves resonance, but the aural feedback feels quite natural. Place the car in Dynamic mode and everything tightens up – making the car appear more nimble on the limit. There’s still plenty of grip, while the optional (£900) adaptive dampers allow a firm but comfortable ride. 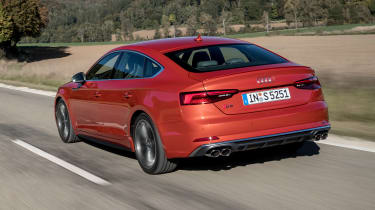 Also on the options list is a quattro Sports Differential for £1,200. It is supposed to make the S5 feel more like a rear-wheel drive car, but in reality there’s so much grip that it never feels that playful. Like in the A5 Sportback TDI that we've already driven, the steering lacks feel, too, making the S5 more of a point-and-squirt limousine than an all-out dynamic benchmark. It isn’t slow, though; 0-62mph takes just 4.7 seconds (four tenths quicker than before), while top speed stays pegged at 155mph. A rear-drive BMW 440i isn’t quite as quick, but remains the driver’s choice in this segment.

Fuel economy for the S5 Sportback now stands at 37.7mpg (up from 35.8mpg), and emissions drop from 184g/km to 170g/km. That’s a marginal improvement, and only enough to save private buyers £20 a year in road tax. Company car drivers will be better off with the still-punchy 3.0-litre TDI, too, but the S5 does escape the three per cent diesel surcharge for Benefit in Kind.