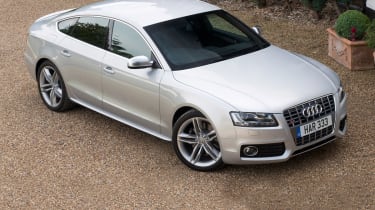 There's a lot to like about the S5 Sportback. Audi's range has grown at an improbable rate in recent years, and some of the resulting model/bodystyle combinations have been more successful than others. The S5 Sportback's supercharged 3.0-litre V6 engine is the perfect partner for the sleek five-door coupe body, and the cabin is as sumptuous as we've come to expect from modern Audis. The only question marks are whether it's worth paying a premium over the mechanically identical S4 saloon, and if the driving experience is involving enough to truly satisfy keen drivers.

With a 328bhp supercharged V6 engine under the bonnet, you're never going to be short of performance in the S5 Sportback. This engine first appeared in the Sportback, and was later introduced across the S5 Coupe and Cabriolet range, replacing the old 4.2-litre V8. Quattro four-wheel-drive, 440Nm of torque and a slick S tronic dual-clutch gearbox ensure rapid progress in all conditions, but while there's no disputing this car's raw pace, the driving experience leaves something to be desired: there's no manual gearbox option in the Sportback, and the steering could do with more feel.

The S5 Sportback has a supercharged V6 that's a good deal more efficient than the naturally aspirated 4.2-litre V8 of old, but it will still only just return 30mpg if driven sensibly. That's an impressive figure when you consider the performance on offer, but for the vast majority of day-to-day driving, one of Audi's accomplished diesel engines will offer better economy while not trailing too far behind the S5 engine's performance. CO2 emissions are 219g/km, so road tax is reasonable for a performance car. Insurance won't be cheap, but residual values are solid. However, the Audi S4 is cheaper in both saloon and estate guises, so you have to ask yourself if you can justify paying an extra two to three grand more for the S5 Sportback.

The Audi S5 Sportback takes a very smart looking car and adds more aggressive bumpers, skirts and alloys. It's certainly much more distinctive than rivals such as the BMW 3 Series or Mercedes C-Class, neither of which offer a five-door bodystyle like this. However, in common with other contemporary Audis, the overall effect is still rather restrained. This is part of the appeal for some owners, but others might want their car to shout about its performance potential a little more. The interior echoes the classy upmarket looks of the exterior.

The S5 Coupe and Convertible are a tight squeeze for four adults, but there'll be no such problems in the S5 Sportback, which matches the more conventional S4 saloon for cabin space, while adding the convenience of a large hatchback boot. The central rear seat is quite small, though, so the S5 is definitely a comfortable four-seater rather than a genuine five-seater. But if you really want practicality, you might be better off going for the S4 Avant estate: it offers even more luggage space with the same great V6 engine and quattro drivetrain.

These are two of Audi's strongest suits, so there should be no worries for Audi S5 owners here. The company produces some of the best interiors in the business: everything feels incredibly solid and well screwed together. Safety is absolutely first-rate, too: a five-star Euro NCAP rating is backed up by the security of quattro all-wheel drive in slippery conditions and a full complement of electronic driver aids to keep you pointing in the right direction. There have been no major recalls, either, so with regular servicing the S5 should just run and run. 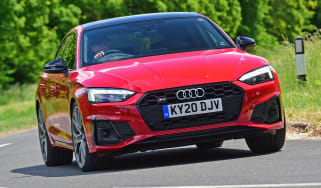 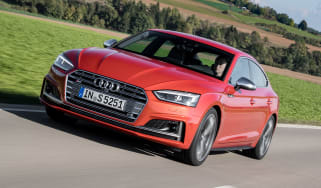 The new Audi S5 Sportback offers a combination of luxury and speed, but what's it like on the road?
Skip to HeaderSkip to Content