Muscular Audi S5 Cabriolet drop-top is fast, but not engaging enough to drive 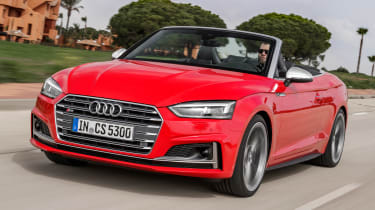 Make no mistake: the new Audi S5 Cabriolet is a fast, desirable and extremely high-quality piece of kit. It’s capable and composed, too, but despite Audi’s best efforts, it still isn’t as sharp to drive as the Coupe. The extra aural appeal of the V6 with the roof down is welcome, yet as a fast cruiser, the 3.0-litre diesel is a more likeable and rounded product – as well as being cheaper to buy and run.

This new and improved S5 Cabriolet joins the coupe and Sportback as the final instalment of the Audi S5 range, and is designed to take on the Mercedes-AMG C 43 Cabriolet and BMW 440i Convertible.

Like the A5 Cabriolet we drove recently, the S5 sits on Audi’s newest MLB Evo platform, with larger exterior dimensions but a reduction in weight over its predecessor. The S5 is 40kg lighter – although it’s still a substantial 225kg more than the coupe, due to the added strengthening required by the removal of the roof. Audi claims it’s 40 per cent stiffer than before, too. 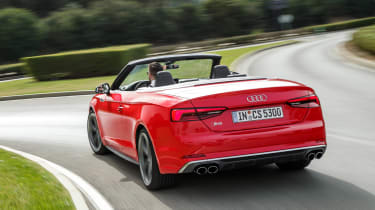 The extra weight over the coupe means performance suffers, on paper at least. Despite the 349bhp 3.0-litre turbocharged V6’s best efforts, 0-62mph takes 5.1 seconds, which is four-tenths slower than the hard-top.

For the most part, however, you’d be hard-pushed to tell the difference; it feels just as strong, firing through the dual-clutch gearbox’s eight ratios thanks to the healthy 500Nm of torque.

With the roof down, your ears get full access to that tuneful V6 while the exhaust pops and bangs on the overrun. That’s the key benefit of the drop-top over the coupe; it adds a little bit of drama that was previously in short supply. 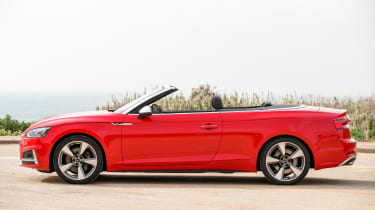 Don’t think that makes it more of a driver’s car, however. Audi has slightly softened the suspension of the Cabriolet to ward off body shimmies associated with losing the roof. It rides with a firm but controlled fluidity most of the time as a result, but some shake is still evident over really rough roads, and the softer set-up introduces a touch more body movement.

It’s more suited to taking it easy, then – but in that case, the torquey and smooth V6 diesel seems to be the better fit.

Elsewhere, there’s little to complain about. The fabric soft-top folds quickly and can be operated at up to 31mph, while the cabin remains smart and the build quality is first-class. There’s even a decent amount of space for four adults.