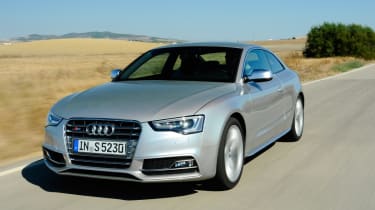 The Audi S5 is a high performance version of the Audi A5. Designed to rival models such as the BMW 335i and Jaguar XE S, the S5 sits just below the fire-breathing RS5 in the line-up. It’s available with all the same bodystyles as the regular A5, which means buyers get the choice of Coupe, Cabriolet and Sportback versions.

Inside, the changes are even harder to spot. The instruments get light grey faces and S5 logos, while the standard front seats are ditched in favour of high-backed bucket items. High-grade materials and flawless build quality help give the interior a classy and upmarket feel, but the overall design is starting to look a little dated. And while there’s a decent amount of standard kit, you’ll have to fork out extra for items such as sat-nav.

All models are powered by the same supercharged 328bhp 3.0-litre V6, which is mated to Audi’s trademark quattro four-wheel drive transmission. As you’d expect, performance is strong, with the benchmark 0-62mph sprint taking a fraction less than five seconds. Furthermore, the addition of all-wheel drive means it’s possible to use the S5’s full performance potential regardless of the weather.

Yet while the Audi is fast and composed on the road, the handling is a little lifeless. The steering is direct, but it delivers very little feedback and feels too heavy in its sportiest setting. Still, body control is good and the S5 is rarely flustered, even during sudden changes of direction.

The downside of this cornering composure is a firm low speed ride, which is at odds with the S5’s otherwise excellent cruising credentials – noise levels are low and the driving position is spot on.

When the S5 Sportback and Cabriolet were introduced in 2009, they heralded the launch of a new supercharged 3.0-litre V6. Designed to replace the 4.2-litre naturally aspirated unit that lives on in the flagship RS5, the new engine delivers 328bhp and 440Nm of torque. In combination with the standard seven-speed S tronic twin-clutch gearbox and quattro all-wheel transmission it allows the S5 to sprint from 0-62mph in as little as 4.9 seconds and onto an electronically limited top speed of 155mph.

The Audi’s trademarks four-wheel drive set-up also delivers fantastic all-weather grip and traction, allowing you to make the most of the S5’s performance. Yet while the Audi is fast and capable along a twisting back road, it lacks the engagement and ultimate precision of cars such as the BMW 335i and forthcoming Mercedes C450.

The biggest bugbear is the steering, which lack the feedback you expect from a sportscar. Audi’s Drive Select system allows you to tailor the steering weighting and throttle response to suit your mood, but in Dynamic mode the steering is heavy and lifeless far better than the notchy six-speed manual of the older V8 model.

The S5 is easy to drive quickly, though, and will prove no problem to live with day-to-day. Wind and road noise are well suppressed, while the V6 engine is barely audible at a cruise. And while the ride is still quite firm, despite suspension tweaks as part of the 2012 facelift, you can specify optional adaptive dampers that in Comfort mode do a good job of soaking up bumps.

You don't buy a 328bhp supercharged V6 coupe and expect to achieve low running costs, but Audi's decision to switch from the old V8 has made the S5 a more wallet-friendly machine. Fuel consumption has improved from 22.8mpg to 34.9mpg, while CO2 emissions dramatically improved - down from 298g/km to just 178g/km, making it far more attractive for business owners. Standard-fit stop-start technology has helped contribute to these improved figures.

Audi also offers a pay monthly payment plan for regular servicing, while all S5 models should retain around 50 percent of their new price after three years. However, be warned that it’s very easy to get carried away with Audi’s extensive options list, and before you know it the price of your S5 could hit £70,000.

In all forms the S5 is a sleek looking machine, but at a glance it’s hard to tell it apart it visually from racy S line versions of the standard A5. The biggest clues to the S5’s high performance status are its subtle bodykit, quad exit exhaust pipes and distinctive silver finished door mirror caps. The S5 is also available with some exclusive metallic paint finishes, while Cabriolet models can be ordered with one of four different fabric roof colours.

A facelift in 2012 included a new look nose with reprofiled bumpers and a revised headlight design with eye-catching LED daytime running lights and Audi's latest grille.

Climb aboard and you’ll discover top-notch materials and impeccable build quality. However, there’s no denying the interior is beginning to feel its age now, especially when compared with Audi’s newer models, such as the A3 and A6. Still, the dashboard is logically laid out and the high-backed sports seats are comfortable. Other sporty touches include a leather steering wheel with contrast stitching, S5 branded dials and brushed aluminium trim inserts.

All S5 models come with a decent amount of standard kit, including three-zone climate control, leather seat trim and 19-inch alloy wheels. Black Edition versions add desirable extras such as a Bang and Olufsen stereo, a flat bottom steering wheel and subtle gloss black trim inserts for the exterior. However, we’d expect sat-nav to be standard on a car costing this much.

Practicality in the S5 is remarkably good for a car with a focus on performance. In coupe guise you get a decent 455-litre boot that can expand to 829 litres with the rear seats folded. And while it’s a strict four-seater, those sitting in the back get a decent amount of head and legroom.

The Cabriolet isn’t as spacious, with its folding hood mechanism eating into both the room for passengers and boot capacity. For instance, boot space shrinks to 380-litres – although unlike rivals such as the BMW 4 Series, the carrying capacity doesn’t reduce when the roof is lowered.

The S5's quattro four-wheel-drive comes into its own when the wintry weather comes in. It remains a usable car, unlike rear-wheel-drive rivals the BMW 4 Series and Mercedes C-Class Coupe - unless they have winter tyres fitted.

Like all Audis, the S5 is a very safe car. Stability control, six airbags and four-wheel-drive are all standard, while the options list is packed full of extra safety kit including lane-departure warning, blind-spot warning and a rear-view camera. Cabriolet models also feature pop up rollover bars that are deployed if the car senses a serious accident is imminent. Quality is fantastic and we'd expect reliability to be the same.

The standard A5 Sportback finished a very respectable 26th in our 2015 Driver Power satisfaction survey, with owners praising its build quality, performance and in-car tech. Given that the A5 is closely related to the S5, you can expect a similar an equally trouble-free ownership experience.

However, while owners are pleased with their cars, they’re less impressed with the service from dealers. Despite the upmarket image of its showrooms, Audi’s network of franchised garages finished a lowly 26th in our 2014 poll. Drivers slammed the attitude of the staff and the poor value for money on offer. 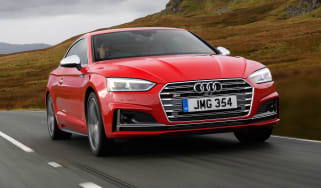 The new Audi S5 Coupe offers plenty of performance, but is it any fun to drive?
Audi S5 Cabriolet vs Infiniti G37 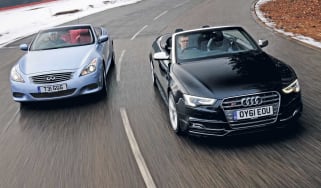 We hardy Brits love our convertibles, even in the winter. But is the new soft-top Audi S5 a better buy than the Infiniti G37 coupe-cabrio?
Audi S5 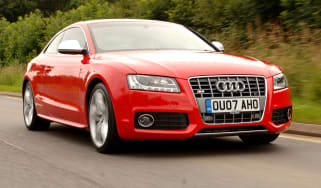 With great pace and assured handling, Audi's S5 is a good alternative to offerings from BMW and Mercedes
Audi S5 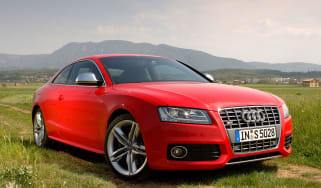