With great pace and assured handling, Audi's S5 is a good alternative to offerings from BMW and Mercedes 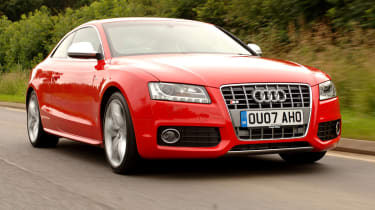 With great pace and assured handling, the S5 is a good alternative to offerings from BMW and Mercedes. It lacks a little in involvement, but it does possess one important ingredient - the feelgood factor. Take the rumbling V8, stylish lines and a cabin with a sense of occasion, and the S5 makes a good case for itself. However, that does come at a price - at nearly £40,000, no one could argue that it's cheap, but it is well equipped with standard kit.

When it comes to coupés, no one does it quite like Audi. First came the all-conquering TT, which was followed by the sensational R8. But, despite a line-up that has more than doubled in the past 10 years, the firm has never really had a direct rival to the likes of the BMW 3-Series Coupé.

That's all about to change with the launch of the A5 and S5 - the first of a new generation of mid-sized models that are wasting no time in going for BMW's jugular.

While most manufacturers stagger the launch of their high-performance variants, Audi is offering the sporty S5 quattro from the outset. It is a car which it hopes will take on the excellent 335i Coupé and act as a halo model for the rest of the A5 range.

So, should BMW be worried? We think so. For starters, the S5 certainly looks aggressive and muscular, helped by its low stance and wide track. A chrome-edged grille, silver mirrors and a more pronounced spoiler set the flagship apart from the standard car - as do the twin dual exhaust pipes.

True, it may not be a radical dep-arture in terms of styling for the company, but the A5 range is hugely important. It features an entirely new-generation bodyshell and is the first Audi to use a fresh platform that will also underpin the forthcoming A4 saloon and convertible.

There are also changes in the cabin, with slightly revised switchgear, an intelligent key system and an improved version of the familiar MMI (Multi Media Interface) programme.

We were disappointed that some of the controls don't seem quite as robust as in previous cars, but, as you'd expect, the build quality and finish are second to none. The driving position is also comfortable, and the cabin wraps itself around you, adding to the feeling of sportiness.

Press the stylish engine start/stop button, and the throaty V8 roars into life. The sound is a little muted on the move, but with 349bhp on tap, performance is as swift as you would hope for, with a 0-62mph sprint time of little more than five seconds.

The in-gear performance is equally impressive, and while its acceleration is smooth rather than instant, the S5 gathers pace very quickly.

The new platform gives the A5 the longest wheelbase yet seen in a mid-sized Audi, and is achieved thanks to a front axle which is placed as far for- ward as possible. This allows the engine to be positioned directly behind it, improving weight distribution.

And S5 buyers also get stiffened suspension, uprated brakes and 19-inch alloys, providing a set-up that can easily handle uneven road surfaces without being crashy. But the coupé isn't easy to drive in traffic, due to a sharp throttle and sensitive clutch.

Instead, it's much happier on open roads. True, the steering can't quite match the feedback offered by BMW, but the quattro configuration means that grip levels are truly exceptional, while body control is equally good. Again, thanks to the low stance it feels well poised, but is agile and takes corners effortlessly - making it a superb grand tourer.

Currently, the only other A5 model available is the 3.0-litre diesel, but later this year two more engines will be added to the range. They will be a 3.2 FSI and a 2.7 TDI, both of which will come with a multitronic box and in standard front-wheel-drive guise. Meanwhile, an entry-level 1.8 TFSI unit with 168bhp will be introduced next year, giving buyers a choice of powerplants to rival BMW.