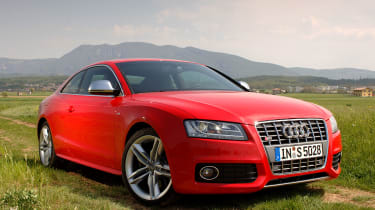 It doesn't offer the stand-out styling of the TT, but Audi's A5 is still a fine car and a welcome alternative to BMW's 3-Series Coupé. It's a great grand tourer that's capable of travelling long distances at speed and in comfort. And in the guise of this top-of-the-range S5, it has brilliant, secure handling and towering performance. The shortage of rear space is a big drawback, though, and this S5 is expensive. With the 3.0-litre diesel costing £33,430, its clear that lesser A5s will be the ones to go for.

Audi's large coupé is back! Not since the S2 left the line-up in 1996 has the German brand offered a rival for BMW's 3-Series Coupé. But now, the firm has finally given its popular TT a big brother - and it's hoping for similar sales success.

Called the A5, the newcomer is armed with a stylish body, a fresh platform and, according to Audi, one of its sportiest chassis ever. A range of petrol and diesel models arrives before the end of the year, but from July, two quattro four-wheel-drive versions will be available.

And to show how aggressive Audi is being with the new model, it's launching the high-performance S5 variant first, as well as a 3.0-litre TDI diesel. The S5 is aimed at BMW's brilliant 335Ci flagship - can it set the standard for the rest of the range?

Inspired by the Nuvolari concept from the 2003 Geneva Motor Show, the A5 has been penned by VW Group design chief Walter de'Silva, who claims it's the most beautiful car he's ever produced. We wouldn't go quite that far, but it does stand out.

The front gets Audi's square grille and bold headlights, the rear is wide and purposeful, while the lack of any overhangs gives athletic proportions. But the curved front wings are at odds with the many straight edges, and the A5 isn't as cohesive as the TT.

This S5 looks muscular, though, with its subtle but aggressive bodykit, LED daytime running lights - the same as those seen on Audi's R8 supercar - discreet rear spoiler and chrome quad exhaust tips.

The cabin is typically Audi. Everything you touch in the A5 feels superb, while a handy new keyless starter - which plugs directly into the facia - adds to the sense of quality. There's an excellent driving position as well, and the high shoulder lines mean the car seems wrapped around you.

However, despite a body length of 4.6 metres, the A5 isn't particularly spacious. Rear passenger legroom is very poor, with only children likely to fit in the sculpted chairs.

But at least the boot has a 455-litre capacity, and the rear seatbacks split and fold to increase space further. Under the skin, the A5 features an all-new platform which borrows some of its architecture from the next-generation A4. This places the front axle as far forward as possible - which allows the engine to be positioned behind it, improving weight distribution - and there's a new five-link suspension layout at the rear.

Dynamic modifications for the S5 include stiffened suspension, uprated brakes and 19-inch wheels. Under the bonnet, Audi's 4.2-litre FSI V8 provides 349bhp and 440Nm of torque. The engine is hooked up to a quattro four-wheel-drive system which splits power 40:60 front to rear.

And the car's performance is searing. The 0-60mph sprint takes around five seconds, while top speed is limited to 155mph. In-gear flexibility is the S5's most impressive feature, though, with lots of punch all the way to the 7,000rpm red line, accompanied by a deep-chested V8 rumble. Motorway cruising is brilliantly relaxed, too.

However, the six-speed gearbox is notchy which, combined with a sharp throttle and clutch, can make progress jerky at low speed. The stiff suspension is also very unforgiving, and the S5 is uncomfortable around town.

On smooth tarmac it's much better. Body roll is well controlled and the drivetrain offers total traction at all times. The steering is quick and accurate, too, but lacks feedback. So while the S5 feels very fast and competent, it's ultimately a bit numb.