We hardy Brits love our convertibles, even in the winter. But is the new soft-top Audi S5 a better buy than the Infiniti G37 coupe-cabrio? 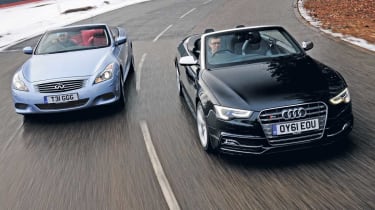 Heater set to maximum, breathing in the crisp winter air – there’s a slightly illogical pleasure to driving a convertible in less than balmy conditions, which maybe explains why we buy so many here in the UK.
And for years Audi’s four-seater cabriolets have been a popular choice – the Audi 80-based cabrio, the A4 and its replacement, the A5, have all been the height of fashion. Now, in line with the rest of the A5 range, the Cabriolet has been given a mid-life update.
The flagship S5 costs £45,895, and is the most glamorous model in the range. It’s packed with Audi’s familiar technology, including a supercharged V6 engine, quattro all-wheel drive and dual-clutch S tronic box. Plus, the subtly beefed-up styling displays all the usual traits of the company’s performance models.
However, it’s close on price to an interesting new contender – the Infiniti G37 Convertible. In GT Premium trim the G37 has loads of standard kit, while the 315bhp V6 has just 12bhp less power than the Audi. We see how it fares against one of the class’s established benchmarks.

Buying an open-top car is all about getting extra pleasure from your motoring. And on paper, the Infiniti promises something really special, with its combination of a V6 engine, luxuriously equipped cabin and folding hard-top.

Unfortunately, when lined up against the revised Audi S5, the G37 is comprehensively outclassed. It doesn’t handle or ride well, while the engine isn’t as refined as the S5’s supercharged V6 and doesn’t offer the same performance. Build quality is good, but the cabin is dated and the materials used aren’t a match for those in the upmarket Audi.

Poor residuals and high emissions mean running costs are an issue. The S5 costs only a few hundred pounds more to buy, so it represents far better value – and therefore takes a convincing win here. Its V6 engine is smooth, powerful and impressively clean for a performance car. Involving handling and confidence-inspiring all-wheel-drive traction give it a big advantage over the Infiniti.

The S5’s interior quality is first-rate and its fabric roof folds fast and is well insulated. Plus, compared to the G37, you get more passenger room and a bigger boot. It’s an elegant and very desirable cabriolet, and the subtle revisions to the cabin and exterior styling are just the icing on the cake.

The A5 Cabriolet has always been a classy drop-top, and this update keeps it fresh. All models seat four adults in comfort and have a decent boot, while in S5 form, the supercharged V6 engine is powerful and smooth. The dual-clutch gearbox is well suited to the S5, plus strong residuals and decent on-test fuel economy of 21.4mpg are plus points, too.

The Infiniti’s looks divide opinion and it doesn’t have the Audi’s badge kudos, so the G37 faced an uphill struggle from the outset. The disappointing driving experience, cramped passenger space and old-fashioned cabin did nothing to help its case. It’s also costly to run and will depreciate sharply, while the hard-top takes up most of the boot when folded.