V6 and luxury kit are welcome, but hard-top has to be compelling to drive, too 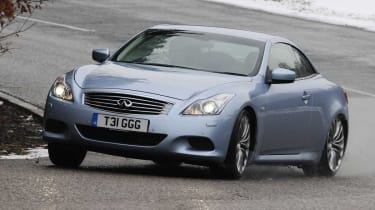 8
Credit where credit’s due – Infiniti isn’t afraid of a challenge. Launching a premium car brand into a European market dominated by the big German manufacturers is difficult enough at the best of times. Doing it in the midst of economic uncertainty is even harder.
The company’s G37 has a particularly tough fight on its hands, as Mercedes, BMW and Audi all have long-established and well respected models in the prestigious four-seater convertible class. At least the familiarity of cars like the BMW 3 Series and Audi A5 means the Infiniti should appeal to customers who want to stand out from the crowd.
However, rarity aside, the G37’s styling doesn’t make a huge impression. The soft curves look good from some angles yet rather bloated from others. The bulbous rear end – where the car’s folding hard-top is stored – doesn’t help matters, either.
Also, the roof itself is disappointing. It takes 31 seconds to fold down and almost fills the boot when stowed. Plus, there are a few creaks on the move and the fabric-roofed Audi is just as good at blocking out wind and road noise.
In common with many coupe-cabriolet designs, the Infiniti’s A-pillars stretch back over the cabin, making it easy to bang your head when getting in and out. They also contribute to a driving position that feels
a little hemmed-in compared to the Audi’s.
The rest of the cabin is a bit of a mixed bag. Build quality is excellent, but a mismatch of materials, the dated design and limited rear passenger space hand the advantage to the S5.
Up front, there’s the slightest hint of retro Maserati inspiration about the curved dash, traditional clock and shiny wood-effect trim. Yet in complete contrast, the fiddly sat-nav and audio system is a familiar Nissan-sourced item. Plus, some of the plastics just don’t feel or look high-quality enough for a car in this price bracket. In the back, the seats are upright and legroom is limited, so the Audi is a lot more comfortable for adult passengers.
A generous standard equipment list counts in the G37’s favour, though. Unlike in the Audi, heated seats, cruise control and a rear-view camera are all included, as is satellite navigation and a Bose sound system.
The 3.7-litre V6 engine has a bigger capacity than its rival, but as it’s normally aspirated, it lacks the supercharged flexibility of the Audi. Power delivery is fairly flat low down and it becomes strained higher up in the rev range. Compared to the rapid Audi, in-gear response is sluggish, while the seven-speed automatic gearbox is neither as smooth nor as fast at shifting gears as the S5’s dual-clutch set-up.
In corners, the G37 feels like it has a high centre of gravity and there’s lots of body roll. This lateral weight transfer can lift the unloaded rear wheel, compromising traction. There’s noticeably less grip than in the Audi, and while the steering and turn-in is positive, there’s little feedback through the wheel.
The brake pedal feels solid and numb, too, while the ride is unsettled. All of which means the G37 is dynamically outclassed by the Audi. Unfortunately, it also suffers from poor residuals, high emissions and hefty road tax and fuel bills – we only averaged 19.3mpg.
Helpful customer-care programmes, such as free home collection and delivery for servicing, go some way towards making up for the cost of ownership, and its rarity and novelty value will appeal to some. But the Infiniti still faces an uphill struggle.

Chart position: 2WHY: The G37 Convertible is new to Europe, but it’s an established player in the US. With a V6 engine and folding metal hard-top, it aims to make a name for itself here.