Class-leading high-performance convertible has been refreshed. So is it still on top? 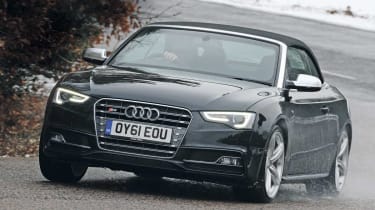 8
Audi describes the 2012 A5 Cabriolet as “extensively re-engineered and subtly restyled”, but you’ll need a keen eye to spot the changes, either on the standard version or the range-topping S5 tested here. The revised headlamp design, with its LED strip around the lens, is most likely to give it away.
The gently reshaped bumpers, bonnet and grille are less obvious and have been tweaked to keep the A5 Cabriolet up to date. Not that it needed much work, as a solid shoulder line and classy proportions have helped this elegant drop-top age very well.
This is especially true in S5 form, where the metal trim circling the base of the taut fabric hood is complemented by the aluminium-effect door mirrors and windscreen surround. Inside, matt aluminium inlays, S-branded dials and S5 kick plates continue the theme, as does the chunky steering wheel. The leather sports seats hold you tightly and offer a wide range of adjustment.
As we’ve now come to expect from Audi, the cabin is upmarket, sensibly laid-out and faultlessly executed. Material quality is superb (noticeably better than in the Infiniti), while in the back there’s more legroom – this is a cabriolet that can genuinely carry four adults.

The fabric hood is a big plus point, as well. For starters, it takes half as long to fold down as the Infiniti’s hard-top. Plus, unlike its rival, it can fold while the car is moving slowly.
Crucially, it isolates wind noise just as well and doesn’t take up all the luggage space when it’s lowered. In fact, with a 380-litre boot and folding rear seats, the S5 is about as practical as sporty soft-tops get.
Unsurprisingly, not much has changed in the first-rate cabin. Updates include new stalks, extra ebony trim on the centre console and a simplified MMI system with fewer buttons than before. The optional sat-nav features improved graphics and all the mapping, audio and phone systems are easier to use and more modern than the Infiniti’s.
With an extra 80Nm of torque and a fraction more power than the G37, the S5 has the upper hand under the bonnet, too. This silky smooth supercharged V6 had already appeared in the S5 Cabriolet before the facelift, and it’s now been fitted to the 2012 coupe, as well. This is hardly surprising, because it’s a gem of an engine. Peak torque arrives at 2,900rpm, which is 2,300rpm less than in the Infiniti, and power delivery is smooth and effortless throughout the rev range.
It sounds great, and combined with the S tronic gearbox, it offers very flexible performance. The S5’s shifts are smoother and faster than the Infiniti’s, while the Audi’s all-wheel-drive traction helps it to sprint from 0-60mph in 5.6 seconds – nearly a full second quicker than the G37.
A smooth stop-start system plus new electric power-steering have helped reduce the S5’s CO2 emissions from 224g/km to a very impressive 199g/km. However, the inconsistent weighting of the steering is a slightly disappointing by-product of these changes. Go for Audi’s £183 Drive Select system and the steering weights up in Sport mode, although there isn’t really a noticeable improvement in feel.
Nevertheless, the S5 turns in positively, and once into a corner, it’s much better than the G37. There’s more grip and less body roll. This composure is reassuring, but the large wheels and stiffer springs and dampers of the sports suspension make the ride a little unforgiving on rough surfaces.There is some creaking around the windscreen, but overall refinement is better than in the Infiniti.
In fact, thanks to its stronger residuals, cheaper insurance, better economy and lower tax bills, the S5 comprehensively outclasses its rival in almost every area.

Chart position: 1WHY: You have to look closely to spot the changes, but the A5 Cabriolet has been revised. So how will the sporty S5 model compare to the Infiniti G37?

For an in-depth buyer's guide on the Audi S5 from Classic and Performance Car click here...