We get to grips with the all-new Audi A5 Sportback, but is it an improvement on its predecessor? 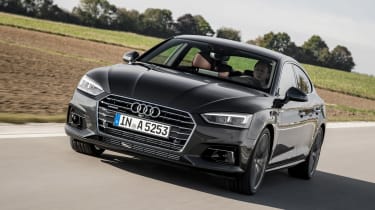 Sharper, sleeker and cheaper to run, the new Audi A5 Sportback improves on the outgoing model in near enough every area – taking all the best bits from the revised A4 and moulding them into a more desirable package. A BMW 4 Series Gran Coupe is still more fun to drive, but the A5 is incredibly refined, comfortable, and – as a 3.0-litre TDI, at least – mighty fast.

The Audi A5 coupe is a two-door version of a four-door saloon, while the Sportback is a 'five-door coupe' variation of the two-door, which – like we said – is based on the four-door A4. Confused? Well, it’s actually much simpler than it sounds.

Acting as a halfway house between the sporty A5 and more mature A4, the A5 Sportback is a sleek, stylish coupe with a bigger boot and a pair of usable rear seats. It first went on sale in 2010 – and now we’ve been given the chance to drive the second-generation model ahead of first UK deliveries early next year.

Like the A4, it comes with a range of tried and tested petrol and diesel engines, as well as a high-performance S5 model capable of 0-62mph in 4.7 seconds. The entry-level 2.0 TDI will take the lion’s share of sales, but it’s the more powerful 3.0-litre we drive here for the first time. 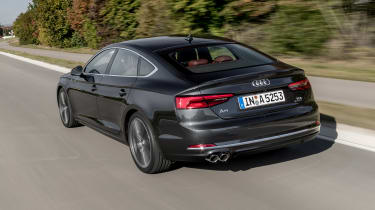 Mated to the brand’s venerable Quattro all-wheel-drive system, the A5 Sportback feels incredibly planted on the move. Audi hasn’t announced performance figures for the 3.0 TDI, but the engine is an updated version of that in the less powerful A4 which covers 0-62mph 5.3 seconds. The Sportback feels even faster. Eventually, all Audis fitted with the 3.0-litre TDI will get the power increase from 268bhp to 282bhp, as well as the 20Nm boost in torque.

Using the VW Group’s MLB evo platform - which underpins everything from A4 to Q7 - has allowed engineers to shave up to 85kg from the A5 Sportback. It makes the sleek five-door feel more nimble on the road than it did before, with impressive body control through long sweeping bends. The light and slightly numb steering means it’s less suited to quick changes of direction, but it’s incredibly stable and easy to drive. 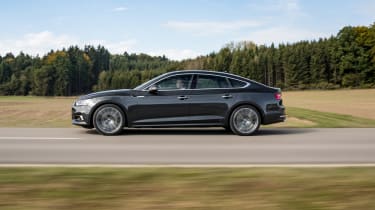 It’s amazingly refined, too. The sleek shape sees a drop in the car’s drag coefficient from 0.29cd to just 0.26cd – but the super-quiet interior highlights a bit of wind whistle around the A-pillars and door mirrors. There’s very little in the way of tyre roar, though, even at 120mph on a stretch of deserted German autobahn. Unfortunately, our test route was super smooth, so any judgement of ride quality is best reserved until we try the car in the UK. The car was well behaved over loose drains and expansion joints, however, so providing you spec the optional adaptive dampers, it should suffice back in Britain.

Not only is the new A5 Sportback faster and more fun, it’s also more economical. While exact numbers for this 3.0-litre TDI haven’t been announced, more than 50mpg is highly likely thanks to its sweet-shifting eight-speed auto. Audi has done away with the dual-clutch S tronic that you’ll find in the smaller-engined cars – purely due to the big slug of torque available from low revs. Predicted CO2 emissions of around 135g/km should shame the BMW 435d xDrive Gran Coupe (150g/km), too.

It’s the entry-level 2.0-litre TDI ultra that’ll be top of the wish list for high mileage drivers and fleet buyers. Again, numbers haven’t been revealed, but the Coupe will do up to 70.6mpg, and the aerodynamic Sportback is unlikely to be far behind.

On the outside, Audi’s design bosses have taken an evolutionary approach to styling, with the new A5 Sportback barely distinguishable from the old car. Line them up side-by-side and the differences become clear. The front-end sports a wider grille and sharper headlights, but the sweptback shape remains. There are some sharper creases down the side, too, while full-LED taillights on our S line car give the A5 a distinctive signature at night. 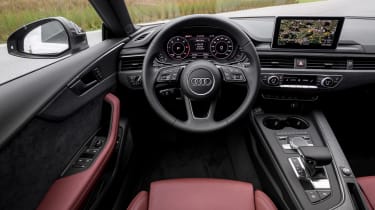 Interior quality is second to none – and it’s here that the big advances have been made. Only the Mercedes C-Class comes close, with plenty of high quality, luxury leather and metals dotted around the cabin. Audi’s excellent Virtual Cockpit display looks as good here as it does in an R8 costing three times as much, and is an option worth speccing if you spend a lot of time behind the wheel.

The wide, central screen is well integrated, too. Unlike in the A3 – which features a retractable setup – the A5’s display is fixed. It’s better than Merc’s iPad style afterthought, and all the functions are easily controlled using an up-to-date MMI wheel on the centre console. 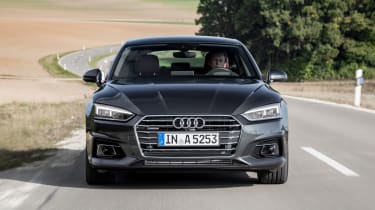 The addition of rear doors does help make the Sportback more practical than the Coupe. There’s enough space for two in the rear, though taller passengers will struggle for headroom. The middle seat is nearly useless, however, with that sloping roofline really limiting versatility. Behind the rear seats you’ll find a decent 480-litre boot, which features handy tie-down points and luggage nets, too. There’s no underfloor storage however, and the door bins are slightly smaller than we’d like.