After ditching the Infiniti G37 cabrio’s winter tyres, we can’t wait for summer to start 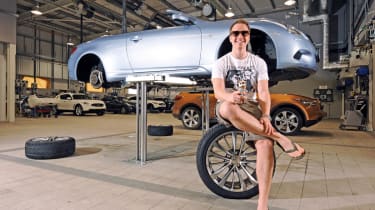 6
Call me optimistic, but with the temperatures creeping up, I’m already looking forward to the summer. So besides dusting off my shorts and buying my first ice cream of 2012, there was one other thing that needed my attention – the Infiniti G37’s tyres.
The winter tyres fitted to the coupe-cabrio when it arrived on our fleet are designed to stay soft and grippy even in temperatures well below freezing. But when the road surface reaches around seven degrees Celsius or above, they have less grip than a set of regular summer tyres. Plus, they wear faster and affect fuel economy – so it was time to switch.
This couldn’t be easier for Infiniti owners. A one-off charge of £1,100 not only buys the tyres, it also includes fitting and storage – so Infiniti will look after the set you’re not using and swap them back as part of the package.
We called Infiniti’s flagship dealership in Reading, Berks, on a Friday afternoon and got an appointment the following Tuesday. From the moment I rolled up to the moment I left, I was treated impeccably.

The switch took about an hour – which flew by as I reclined on the plump leather sofa in reception, making the most of the complimentary tea and biscuits. The mechanics even found the time to clean the car inside and out.
While I was there, one of the diagnostic computers pointed out that T31 GGG was part of a recall for a faulty tyre pressure monitoring valve, and the work hadn’t yet been carried out. It turned out this was to do with corrosion of the valve, which could have left us with a slow puncture. My valves were fine, but staff changed them anyway.
I chose the Convertible over the G37 Coupe to see how it would cope over the colder months – and I can confirm that it’s passed the test with flying colours.
The heavy metal roof raises the centre of gravity, causing some body roll through corners, but when the weather closes in outside and you have to put up the top, this car is every bit as snug as the Coupe. After a week or two with the roof in place you soon forget it’s a convertible – it even shares the tin-top’s svelte lines.
What’s more, on the odd day of winter sunshine when I’ve dared to drop the roof, the G37’s powerful climate control and standard heated seats have kept me toasty. The only downside is that the bulky roof mechanism eats into the Infiniti’s already disappointing 366-litre luggage capacity – all you’re left with is a narrow, letter box-style opening and just about enough room for a couple of shopping bags.
But as I travel light, this hasn’t proven too much of an issue for me. And although my colleagues on the road test team ranked the G37 in a distant second place to the Audi S5 Cabriolet in our Issue 1,204 test, it hasn’t dimmed the car’s appeal for me – especially with the prospect of more top-down driving as the summer approaches.

“I’m not surprised by Jack’s experience at the dealer, as Infiniti has worked hard on its customer care. It’s just a pity the G37 is outclassed on the road by its rivals.”Owen Mildenhall, Senior road tester

“There’s something special about Infiniti’s cars – the FX SUV and M saloon in particular look great. It’s good to see another luxury brand entering the UK.”NeilR, via www.autoexpress.co.uk