New Infiniti Q60 coupe is well equipped and stylish, but its driving dynamics aren't as good as rivals 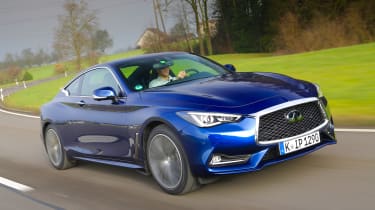 The Infiniti Q60 makes an interesting and distinctive alternative to the popular flock of German four-seat coupes. It’s reasonably comfortable and refined, plus comes loaded with kit. It’s sheer bulk and a sluggish gearbox mean it’s not as good to drive or as efficient as rivals from BMW or Mercedes, while the lack of a diesel engine and limited practicality will immediately put off some buyers.

We wouldn’t blame you if you’d forgotten Infiniti sold a coupe in the UK. The G37 (later called the Q60) may have been one of the market leaders in America, but sales in European markets were so miniscule it was axed almost two years ago. However, given that Britain is the second largest market in the world for four-seat coupes, Infiniti would be mad not to give it another go. Enter this, the new Q60, which we’re driving with the entry-level 2.0-litre turbo for the first time.

We’ve already sampled the range-topping 400bhp Q60 S, a variant which we felt had limited appeal over here. The only other choice in the range is this 2.0-litre turbo, which isn’t just considerably cheaper to buy, but also more efficient. It should offer more to British buyers as a result, although it’ll find tough competition from the German establishment as there is no option of diesel engine available in the coupe. 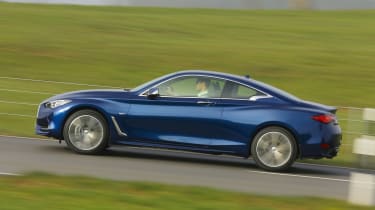 The coupe is based on the Q50 saloon, but certainly stands out in its own way. The huge grille, sculpted flanks and crescent-shaped C-Pillar give it a busy but distinctive look, aided by the smart standard-fit 19-inch wheels. Yet the interior lacks the same sense of style or character – other than the rather fiddly dual-screen dash layout it looks pretty nondescript. Build quality is good, with plenty of plus soft-touch materials, but the design and switchgear means it struggles to shake off that ‘posh Nissan’ vibe. Still, there’s loads of kit: sat-nav, electric leather seats and a full suite of active safety kit are standard across the range.

A wheelbase of 2.85m means legroom for four passengers is decent, but an average-sized adult will find their head jammed against the sloping roof line. Headroom in the front is also a bit tight – not helped by the fact the driver’s seat is mounted too high. There’s no split-folding rear seats, either, which prevents you making the most of the 342-litre boot. Still, what matters more on a coupe is how it drives.

The base Q60’s 2.0-litre Mercedes-sourced four-cylinder turbo unit produces a modest 208bhp but a healthy 350Nm of torque. But the Q60 is heavy – weighing in at 1,750kg, meaning it’s no quicker than your average warm hatch. The engine itself is refined at a cruise and willing to be revved with a pleasing enough noise, but this is no sports coupe. Exacerbating the lack of outright pace is the lethargic single-clutch autobox, which slurs changes smoothly when cruising but kicks down lazily and can’t shift with anything like the speed of rivals’ dual-clutch systems. Switching to Sport mode does little to rectify this, either. 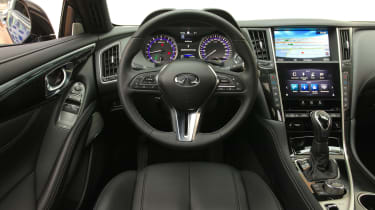 That’s a shame, because the Q60’s drive shows promise elsewhere. Our car did without the optional adaptive suspension, but it did feature Infiniti’s controversial drive-by-wire steering. Engineers have retuned the system for a more natural feel, and it is less disconcerting than it is in the Q50, feeling accurate and direct. There’s zero feedback and interaction from turning the wheel, however.

Body control is pretty tidy, though, and the Q60 strikes a decent balance between ride comfort and roll resistance. Despite this, small road imperfections still cause it to fidget, while push hard in the bends and the Infiniti doesn’t feel particularly rear-wheel drive as it dives into understeer – not helped by its hefty kerbweight. Wind and road noise isolation is commendable, however, making motorway cruising quiet and comfortable.

The Q60’s price is also on the steep side when you consider an equivalent BMW 420i comes in at around £5,000 less. Though strong residual value forecasts and impressive standard kit levels do soften the blow, a claimed 41.5mpg isn't particularly impressive given the limited performance on offer.