Based on the US version of the Nissan X-Trail, the Rogue Trail Warrior is Nissan’s idea of novelty off-roading 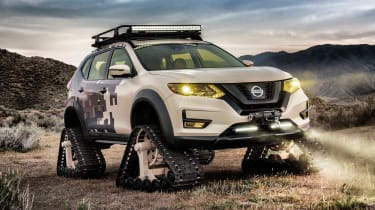 Nissan has built a one-off off-roader called the Rogue Trail Warrior ahead of the New York Motor Show, swapping out the standard tyres that normally feature on the American version of the X-Trail in favour of hardcore Dominator tracks.

The manufacturer, which says the Rogue Trail Warrior is just one of “several” unique takes on the SUV on display at the annual event at the Jacob Javits Convention Centre, had to modify the suspension and wheel wells in order to incorporate the distinctive track system.

But while Nissan has made other visible alterations - including a custom camouflage body wrap and military-style yellow windows - the drivetrain components remain the same. 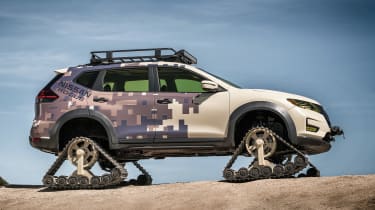 That means the 2.5-litre DOHC 4-cylinder engine remains untouched, with Nissan claiming that the standard output of 168bhp and 175lb ft of torque is “more than enough” for tackling snow banks and sand dunes.

"This new Rogue Trail Warrior adds a new dimension to family adventures with its snow/sand tracks, gear basket, winch and camo paint," said Nissan’s Michael Bunce. "If you want to stand out from the crowd during a day on the slopes or the beach, this is the vehicle to take." 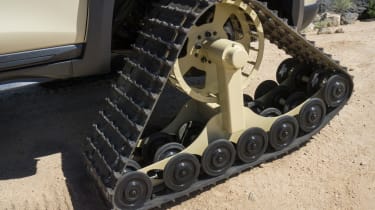 Quite why you’d fit a camouflage wrap to ‘stand out’ is anyone’s guess, although there’s no denying that the Rogue Trail Warrior would get plenty of attention from onlookers. Which would be very handy indeed in the event of it getting stuck...

Would you buy a Nissan X-Trail if it had tracks instead of tyres? Let us know in the comments section below!