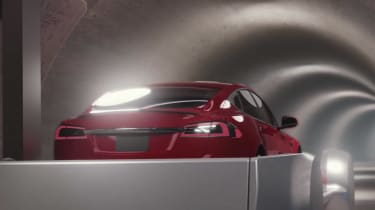 A video shared on Instagram shows the sled accelerating at a rapid rate, before stopping just as suddenly moments later. The experiment was conducted in the Boring Company’s “starter” tunnel - supposedly “a few hundred feet long” - just three days after Musk posted a photo of the boring machine being lowered into place to begin construction.

Established earlier this month, 'The Boring Company' is a new venture that hopes to bore out a large-scale network of tunnels filled with high-speed 'sleds' - electrically powered, automated car carrier platforms which follow a fixed route and are capable of up to 124mph.

The idea is that a car would drive onto the sled platform at street level and would then be lowered through the road down into the tunnel. It then speeds off and merges with other tunnel traffic autonomously. As the Boring Company launch video shows, cars of various shapes and sizes can queue up to use the platforms, allowing a much quicker crossing of the city than would be possible by fighting through surface traffic.

Musk has predicted that, using the tunnels, a driver would be able to complete a journey from the Los Angeles suburb of Westwood to LAX airport in "5 to 6 minutes" instead of the usual 30 minutes to an hour, depending on traffic.

The ambitious plans are only at the concept stage for now, although like many of Musk’s projects, things seem to be progressing at an astonishing rate. Expect to see the first trial tunnels being dug in the not too distant future...

What do you think of Elon Musk's Boring Company venture? Let us know in the comments section.