“All parties must clearly itemise their proposals for drivers”

Mike Rutherford thinks parties need to clarify their views on cars, and not until then should you decide which one wins your vote 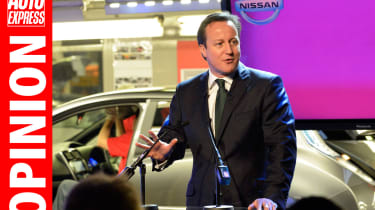 When David Cameron first sought leadership in 2010, he agreed to be interviewed by yours truly. Why? Because DC twigged that, by speaking to me, he’d get through to some of the 50 million daily car users whose votes he craved. The man told me to tell you he was a “friend of the motorist”, and you and your car would be safe in his Conservative hands.

Smart – if cynical – bloke. As most car users have voting cards up their sleeves, he knew they had – and still have – enough political clout to put parties in power.

Not that anyone has told the Liberal Democrats. If I had to name the mainstream party that’s been most hostile towards cars, drivers and passengers over the decades, it’d be the Lib Dems. Former leader Nick Clegg said he wants diesel and petrol cars banned by 2040. And although Cleggy is now toast, his successor, Tim Farron, hasn’t withdrawn the call for the cull of internal combustion.

This party bangs on about social mobility, yet can’t comprehend that our 24-hour personal workhorses play a hugely important role improving education opportunities, home and work locations, leisure activities and freedom (remember that?) for real-world folk on real-world wages.

Labour has never been crazy about cars – unless it’s a Jag for Champagne socialist thugs such as John Prescott and co. And under the leadership of Jeremy Corbyn, who “doesn’t like” cars, the party seems more car-hostile than ever. As Jezza dislikes them, can he really speak up for the millions of  people who build, sell, drive, repair, service or aspire to own them?

Reasonable, non-hypocritical folk don’t use products they loathe. That’s why teetotallers don’t drink gin. So how come I’ve lost count of the number of times I’ve seen the Labour leader travelling in the cars he claims to hate?

As for the Conservatives, I’m hearing Tory top dogs are conveniently (for them) halting all talk of additional anti-diesel car taxes and future bans until Theresa May is “inevitably” returned to power in June with a clear, five-year, largely unchallenged run ahead of her. Will she outlaw some or most diesel cars by the early 2020s? Don’t bet against it.

In the manifestos due for publication about now, May, Corbyn, Farron, plus the leaders of UKIP, the SNP and the Greens must clearly itemise their short, medium and long-term proposals for cars and drivers.

Not until then should you decide which party wins your precious vote.