Drivers in London to face rise in fines 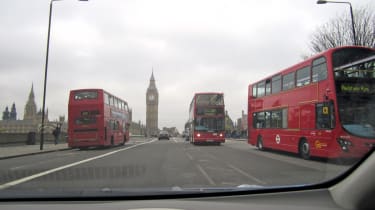 Drivers caught in bus lanes, making illegal turns and breaking other road laws in London will be hit with a near 25 per cent rise in fines, under new plans proposed by Transport for London (TfL).

The transport authority is proposing raising Penalty Charge Notices (PCNs) from £130 to £160 and £65 to £80 for early payment in an effort to improve traffic flow and road safety. The hikes would apply to road offenses on the TFL's road network and for failing to pay the £11.50 Congestion Charge from early next year.

• London 'T-charge' plan to cut vehicle pollution from October, with zone to grow in 2019

The past five years have seen a 12 per cent rise in the number of drivers hit with PCNs. Last year there were 1.5 million PCNs issued to drivers, up from 1.3 million in 2011/2012. TfL says the current deterrent is “no longer effective.”

By issuing higher fines to drivers who block roads, drive in bus lanes or park incorrectly, TfL says it hopes to reduce congestion and improve road safety. Money earned from the PCNs will be invested back into London’s transport network.

The consultation launches 4 September and will run until 10 November, with any changes potentially implemented in early 2018.

Paul Cowperthwaite, TfL's general manager for road user charging, said: "We are committed to keeping the Capital moving and by improving compliance we help keep junctions and roads clear, which if blocked cause significant impact to all road users. The overwhelming majority of motorists follow the rules; however, we have seen a steady increase in the number of motorists flouting them so it is clear the current Penalty Charge Notice level is not as effective as it once was."

Will higher fines improve road safety and reduce congestion in London? Tell us in the comments below...