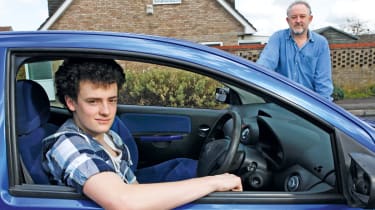 Insurance black boxes have been hailed as a breakthrough for young motorists. These clever telematic systems keep an eye on where a car is and how it’s being driven, so only irresponsible drivers see premiums increase.
But David Allen of Longwell Green, South Gloucestershire, found his Autosaint black box was logging false events that counted against his learner driver son, Tim. David said: “The box recorded Tim driving at 68mph in a 30mph zone when the car never left the drive, and 63mph in a 30mph zone when it was on a nearby road.”
Tim has also picked up Autosaint penalties for harsh braking and acceleration when he’s been accompanied by his dad, who is a member of the Institute of Advanced Motorists.
Left uncorrected, these penalties could have led to hefty premium hikes, and even Autosaint withdrawing his cover.
David told us: “Even when I drive with the greatest care, I pick up penalties, too. These boxes don’t encourage safe driving.”
He added that Tim received a minor fault on his driving test for not going fast enough when joining a dual carriageway, yet the black box recorded the same event as a penalty for going too fast.
We put David’s comments to Autosaint. A spokesman said: “The speeding penalty when the car was stationary was caused by a satellite bug, which was fixed.
“Other false speeding events can happen in a similar way to when sat-navs wrongly beep speed alerts or get confused as to which road they’re on. They are few and far between.”
He added that instances of harsh braking and acceleration shouldn’t be viewed in isolation. David wasn’t convinced.
“The false recordings aren’t rare occasions, and not everyone will check their logs,” he said. “How many just accept the penalty?”
A spokesman for the Association of British Insurers acknowledged the teething problems, but said: “Even with the glitches, young motorists are better off using black boxes.”
The problem An insurance black box recorded false speeding and driving behaviour. The onus is on the driver to check the records and clear their name.

Autosaint's view Early system bugs have been fixed, and inaccurate events are rare and can be reviewed and removed. It said David’s son had an excellent driving score.

Legal advice There’s no legal requirement for insurance companies to share telematics information, but most do. Autosaint is at least easy to review online and the company responds quickly to reported false readings.

Our verdict Motorists using black box systems should go through their driving logs and challenge false readings. Some systems need to improve accuracy so honest motorists don’t get falsely penalised.