Toyota gets factory engineers in to fix a noisy fault on an Avensis, after Auto Express gets involved 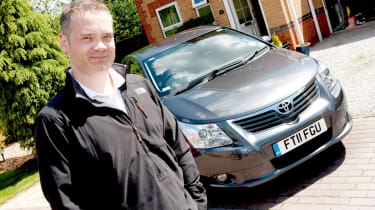 Readers regularly contact us about squeaks and rattles in their cars, but because noises are subjective, it can be very difficult for us to say what’s acceptable and what’s not.
However, when Greg Tagg of Balderton, Nottinghamshire, told us about a cracking noise coming from the rear of his new Toyota Avensis, we were all ears. His dealer had already replaced one car, but now the second one was making the cracking noise, too.
Greg said that his dealer first diagnosed a spot-weld failure on the metal frame between the rear pillars and beneath the parcel shelf. The frame was cut out and a new one welded in.
Yet this didn’t solve the problem, so the dealer replaced Greg’s seven-month-old Avensis with a five-month-old one. Problem solved, then? Not quite.
The replacement car had the same issue. And when Greg asked if he could reject it, Toyota was adamant this was not possible while the warranty process was being followed.
Greg said: “At this stage, all I wanted to do was walk away and purchase a different car. But Toyota didn’t seem to be concerned. It was like banging my head against a brick wall.”
When Auto Express spoke to Toyota, it had taken the rare decision to get factory engineers involved in devising a solution. Part of the parcel shelf needed realigning, but not welding.
Greg’s car was fixed in a week, details of the repair were sent out to the dealer network and five other cars have since been repaired.
A few hiccups aside, Toyota has done well. A spokesman told us that getting the factory engineers involved was part of the firm’s ‘genchi-genbutsu’ philosophy, which means ‘going to the source of the problem’.
And David said Toyota’s customer relations team was more co-operative after Auto Express became involved. He was delighted his Avensis was fixed and happy with the two free services and the new set of tyres Toyota offered as compensation.
The problem A cracking noise in a Toyota Avensis couldn’t be silenced, even after welding. Then the replacement car developed the same problem, too.

Toyota's response “The structural integrity of Mr Tagg’s car was not affected and we kept him mobile at all times. We understand Mr Tagg is now very happy with the outcome.”

Legal advice Under the Sale of Goods Act, you can reject a car if it’s not of satisfactory quality. But if the problem can be fixed, it’s very often a better, easier and less stressful route to go down than taking legal action.

Our verdict Even when customer relations have reached rock bottom, Toyota has shown they can be rebuilt. And credit to the company for getting to the root of the problem, instead of using a quick fix.