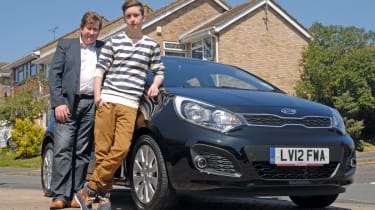 These days, consumers have more power than ever. Easy access to the Internet and social networking means stories of bad customer service get around fast. So you’d think companies would go out of their way to ensure they keep people happy – especially ambitious brands with major expansion plans, such as Kia.
But reader Mark Salter hasn’t been impressed with the company’s customer service so far. Mark, from Swanley in Kent, recently bought 17-year-old son Gruff a brand new Kia Rio 2. “It looks great with loads of features, so I thought it’d be the perfect car for him,” said Mark.
Unfortunately, after 257 miles and less than three weeks of ownership, the brakes locked up while Gruff was driving. “Luckily it was at low speed,” said Mark. “I hate to think what might have happened if it had been on the motorway.”
The car was taken to the Salters’ local dealer – and stayed there for five weeks. A replacement master cylinder took two-and-a-half weeks to arrive from Korea, and it was then decided that the brake servo should be replaced, too – which took another couple of weeks.
Kia arranged a hire car while the Rio was being fixed, but Gruff was too young to be covered on a rental firm’s insurance.
“The hire car was useless to us,” said Mark. “Gruff has been having to get the bus again, and all the while we’re paying hire purchase payments and insurance for a car we don’t have.” Mark had asked to borrow a courtesy car directly from the manufacturer or dealer, so Gruff could drive it, but Kia refused.
A spokesman told us the problem with Mark’s brakes is not a known fault and that Kia is not aware of any similar cases. “We aim to supply the majority of spare parts within 24 hours, but occasionally some do take longer,” he added.
“We agreed with Mr Salter that once he has his vehicle back, has tested it and is comfortable with it, we will then discuss a goodwill gesture, as we are very keen to restore his complete satisfaction.”
The problem Mark and Gruff Salter’s three-week-old Kia Rio had to go in for repairs – but 17-year-old Gruff wasn’t allowed to drive the courtesy car.

Kia's response The manufacturer told us it would offer Mark a goodwill gesture once his vehicle was returned, in order to restore his complete satisfaction.

Legal advice Consumer law specialist Tadge Channer of Access Legal told us the Salters would have grounds to claim the cost of insurance from their finance firm – plus any other expenses incurred while their Rio was off the road.

Our verdict It’s bad enough that the Salters have been without their new car for so long, and worse that the main driver couldn’t use the courtesy car. Kia should compensate them for the expenses incurred.