Leeds University has won a £4.2 million grant to develop robot drones that will tackle road maintenance tasks in the future 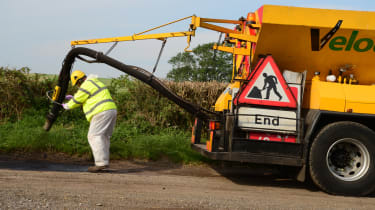 Autonomous tech is one of the hottest topics in the automotive industry at the moment, but in the future it may not just be the cars that can go about their business without human intervention.

The grant is part of a wider £21 million of funding for ‘Engineering Grand Challenges’ research, which aims to tackle some of the major challenges that face scientists and engineers today.

Leeds University is set to develop three different types of robots; the first will be in the form of a drone that can perch on structures at height and perform repair tasks, such as repairing street lighting.

The second type of robot will be able to autonomously inspect, diagnose, repair and even prevent potholes on UK roads, while the third type of robot would live and operate within utility pipes, performing maintenance and repair work.

Last year, the Government announced an investment of £6 billion will be made to local councils to improve their road network. The Government also announced plans to suspend road works to stretches of motorway and major road of 2 miles or longer to ease congestion.

“We can support infrastructure which can be entirely maintained by robots and make the disruptions caused by constant digging up the road in our cities a thing of the past."

Dr Rob Richardson, director of the National Facility for Innovative Robotic Systems at Leeds University said: “Our robots will undertake precision repairs and avoid the need for large construction vehicles in the heart of our cities. We will use the unique capabilities of our robotic facility to make new, more capable robots.”

Do you like the idea of robots undertaking repair work on UK roads? Do you think it's a realistic prospect? Let us know in the comments section below?