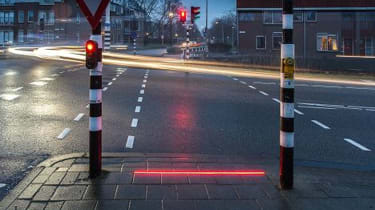 A Dutch municipality has introduced pedestrian traffic lights specifically designed to help smartphone users avoid stepping into traffic by displaying a colourful strip of light on the pavement.

Built by Dutch firm HIG Traffic Systems, the new +LightLine light comes with a LED strip that illuminates the pavement with a horizontal strip before the road crossing. Smartphone users looking at their phone will see the colour of the strip beneath their feet before stepping out into the road.

The traffic lights are being trialled in the municipality of Bodegraven-Reeuwijk and switch the light on the ground between red and green. When the light is about to change colour, the LED strip will blink repeatedly to alert pedestrians.

Kees Oskam, a councillor in the municipality said more and more pedestrians are distracted by their phone at the expense of paying attention to traffic. “We can’t easily reverse this trend, but we want to anticipate it.”

Mark Hofman of HIG, told a Dutch news site OmroepWest: “Smartphone use by pedestrians and cyclists is a major problem. Trams in The Hague regularly make an emergency stop because someone looks at their smartphone instead of traffic.”

Would a similar solution work in the UK? Would it be better if smartphone users looked both ways before crossing? Tell us in the comments below...