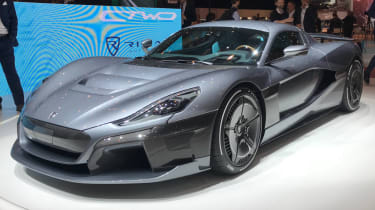 Croatian manufacturer Rimac Automobili has revealed its second electric supercar: the C_Two. It follows the Concept_One, and ups the ante with a whopping 1,888bhp and 2,300Nm of torque. It’ll do 0-62mph in 1.85 seconds (with a one-foot rollout) and hit 258mph flat out.

Pitched as a clean-sheet design, the C_Two apparently carries no common parts from the Concept_One. It gets a 120kWh lithium manganese nickel battery pack, which can be recharged to 80 per cent in just 30 minutes. On a full charge, the Rimac C_Two will offer a range of up to 400 miles.

• Get the latest from the 2018 Geneva Motor Show

The Rimac C_Two gets a motor in each wheel, offering all-wheel torque vectoring (R-AWTV). The front wheels are fed via a single-speed transmission, while each of the rear wheels has a two-speed gearbox and carbon clutch. Huge 390mm Brembo carbon ceramic rotors and six-piston callipers take care of bringing the car to a halt. 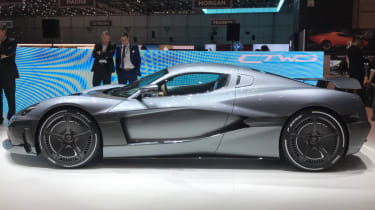 Designed by in-house design chief Adriano Mudri, the C_Two is a clear evolution of the Concept_One. It’s 202mm longer, 132mm wider and 10mm taller than its predecessor, and is 50kg heavier as a result. Despite being made almost entirely of carbon fibre – including a carbon monocoque structure, carbon subframe, carbon roof and carbon body panels – the C_Two weighs 1,900kg. Those huge power and torque numbers mean it still boasts a power-to-weight ratio of around 1,000bhp per tonne, though.

The Rimac C_Two is a technological masterpiece, and will unlock using facial recognition – meaning you won’t need a key to get in and out. The butterfly doors cut into the roof and open skywards to reveal a bigger and more practical cabin. Inside, you’ll find a driver-centric dash, adorned by three high-definition TFT screens.

We’ll have more information on the C_Two as the maker prepares for its launch. We’ve no detail on price or on-sale date, but expect  a premium over the old car’s £880,000 starting figure.

The Rimac C_Two isn’t the only power monster at Geneva. Take a look at the 1,479bhp Bugatti Chiron Sport…