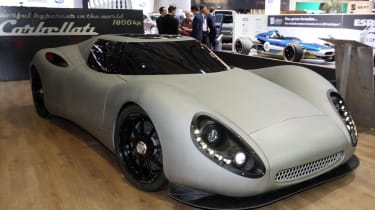 If you thought Pagani built the rarest and most exclusive Italian supercars, think again. This is the Corbellati Missile, a new hypercar that's designed to deliver the ultimate performance. The Italian manufacturer used the 2018 Geneva Motor Show to unveil this new model, which packs some seriously huge numbers to become what its manufacturer claims will be 'the fastest hypercar in the world'.

To that end, the car is fitted with a 9.0-litre twin-turbo, quad-cam V8 with a claimed 1,800bhp and a staggering 2,350Nm of torque. With such a monumental amount of power, you would expect some big performance boasts, but at the moment, the only clue to the car's performance is a claim by Corbellati that the car's aerodynamics are designed to cope with speeds 'over 500km/h'. That's 311mph.

Corbellati says that the Missile's rounded carbon fibre bodywork is optimised to ensure the car will be stable at high speed, and the long-low profile of the car with its truncated rear end certainly stands out.

Other technical details include a carbon fibre chassis and double wishbone suspension with in-board dampers and air springs. All that power is fed to the rear wheels via a six-speed gearbox (there's no confirmation on whether it's a manual or auto) and limited-slip differential, while carbon ceramic brakes with six-piston calipers will bring the Missile to a stop.

In a statement, Corbellati is committed to producing a hypercar with 'unique performance and unique design, just like a jewel'. The Missile is 'the fastest road jewel of the world', and is a 'union of elegance and technology'.

How do you like the Corbellati Missile's chances of cracking 300mph? Place your bets in the comments...