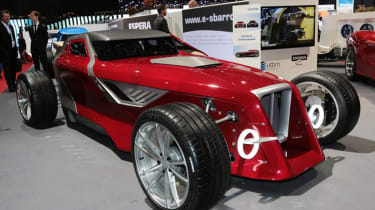 Guided by veteran designer Franco Sbarro, students at the École Espera Sbarro in Montbéliard have concocted a handful of curious concept cars for the 2017 Geneva Motor Show.

Chief among them is the open-top Mojave roadster, which contains a manual five-speed gearbox and a 4.0-litre petrol engine producing 290bhp.

Something that might fare better off the beaten track is the ArCad, an off-road buggy that's similar in concept to the Ariel Nomad. 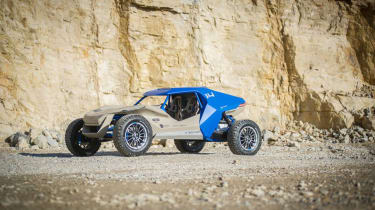 It's got a bit more power, though, as it's powered by a 266bhp 4.6-litre V8 petrol engine. TheArCad weighs 1,100kg and features knobbly tyres that look equipped to tackle terrain tougher than the usual asphalt variety.

• Your complete guide to the Geneva Motor Show

Also part of Sbarro’s Geneva line-up is the Pendo-Traction, a three-wheeled bike which sends all of the power its 650cc engine has to give - some 74bhp, it is believed - through its front wheel.

Rounding things off is the fourth and final offering from the Sbarro team: a bizarre 400cc three-seater prototype dubbed the Tracto-Sphere, which has a six-speed manual gearbox and a hybrid powertrain.

What do you think of Sbarro’s designs? Leave us your thoughts and observations below...