Age is no barrier to beauty - take Alfa Romeo's GTV Coup� and soft-top Spider as proof. Launched in 1996, the two cars stopped traffic with their adventurous looks. Seven years later, the lines that first marked these sports machines out from the rest of the crowd still have the same effect. 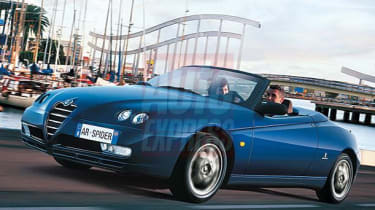 Exterior changes have kept the Alfa's good looks up to date. We like the new 165bhp engine, and it works well with the chassis. But while the 3.2 is one of the best six-cylinder units around, it writes cheques the chassis just can't cash.

Age is no barrier to beauty - take Alfa Romeo's GTV Coup� and soft-top Spider as proof. Launched in 1996, the two cars stopped traffic with their adventurous looks. Seven years later, the lines that first marked these sports machines out from the rest of the crowd still have the same effect.

So they look great, but do they still cut the mustard on the road? We got our hands on the firm's new facelifted editions, unveiled at the Geneva Motor Show earlier this year, to find out.

The engine line-up has been altered, too. It still starts with a 150bhp 2.0-litre unit, but both the coup� and soft-top versions now offer the 2.0-litre JTS launched in the 156. The range-topper, meanwhile, has had a 3.2-litre V6 shoe-horned under the bonnet.

Slipping behind the wheel of the 2.0-litre GTV JTS, the low-slung seats get things off to a promising start, making for a more comfortable driving position. However, you can't help but notice a lack of storage space - there's virtually nowhere to keep essentials such as maps, CDs and sunglasses.

Out on the road, the new JTS - the initials stand for Jet Thrust Stoichiometric - also brings a smile to the face, thanks to its unique direct-injection system. Alfa says the car is good for a respectable 0-60mph time of 8.9 seconds and a top speed of 138mph. But while the five-speed gearbox offers a smooth enough operation, the revs have to be kept high to get the most out of the engine, which does not generate peak torque until it hits 3,250rpm.

The front-wheel-drive layout ensures that the GTV offers secure handling. Push it too hard and the car gently understeers. Although this might satisfy most buyers, there are undoubtedly some who will still crave more power. And this is where the 3.2-litre V6 steps in.

With 240bhp on tap, the new flagship sits on larger wheels and features bigger brakes. An additional ratio in the box makes the most of the extra muscle. We tested the Spider version, and with the roof down the soundtrack of the V6 is surely one of the best you will hear from any car.

Progress is suitably rapid as well, but with 240bhp pounding through it the car wheelspins readily, and during spirited driving it also suffers from torque steer and scuttle shake. It's a real shame, and spoils what could have been a truly fantastic car. We can't help but wish the power went through the rear wheels.