Treo, Treo! We want a Treo and we want one now! That's our verdict after an exclusive first drive of Jeep's newest car, unveiled at the Tokyo Motor Show only two weeks ago. 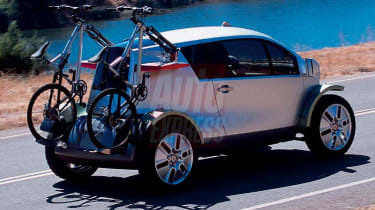 The Treo promises much - and delivers. This is one of the most exciting concepts in years, combining an SUV's rugged styling and upmarket image with the cheeky appearance and limitless manoeuvrability of a city runabout. Parent firm Chrysler is confident the Treo - or a car based on it - will make production, and that's great news.

Treo, Treo! We want a Treo and we want one now! That's our verdict after an exclusive first drive of Jeep's newest car, unveiled at the Tokyo Motor Show only two weeks ago.

And the good news is that the US company's smallest-ever model could well be a production reality in as little as five years' time, thanks to the rapid and widespread development of hybrid and fuel cell technology. Designed in California, the Treo is supposedly a vision of the city car of the future.

Its designer, Freeman Thomas, said: "We want a Jeep for the urban jungle. A car that is just as capable and useful as a city hatchback, but has the purpose and image of a popular SUV. Above all, it also has to be clean enough to show we care about the planet." As far as the looks are concerned, the Treo certainly pulls it off. While it's only 3.2 metres long (shorter than a MINI), the 19-inch wheels and Jeep's trademark seven-slat grille make it look much meaner than its diminutive dimensions suggest

"We wanted to show the strength of construction," added Thomas. "It had to look rugged and well built, as Jeeps always have been." To achieve that, the Treo is built on a truncated Wrangler platform and comes with permanent four-wheel drive, although it's unlikely to ever venture into the rough. Questioned about its mud-plugging ability, Thomas conceded: "We haven't tried off-roading in this car yet because it's a one-off. But given the heritage of its chassis, there's no reason why it shouldn't be as unstoppable as a Wrangler."

As our drive was in the only Treo in existence, worth millions of dollars, we had to take his word for it. But we were able to go for a spin in Tokyo's urban jungle surrounding the motor show, and can report that the Treo is just the job for making light work of city traffic, thanks to its lofty driving position, excellent visibility and agile dimensions.

Our prototype had a brace of electric motors, with one powering the front axle and the other the rear. In reality, this set-up is unlikely to see production. It has a short range, the power delivery is too sharp and it's expensive to build. Even so, it still gives a good impression of what the finished article will be like to drive. The ride is bumpy, but the steering is light and the handling predictable. Thanks to its light weight, the Treo is likely to give lively performance once a production powerplant is installed.

When it hits showrooms, the Treo will be offered with a choice of either Chrysler's F-Type petrol-electric hybrid unit, to debut next year in US Neons, or even a fully integrated fuel-cell set-up, if an infrastructure to support the fuel is in place in time for launch. It will also feature by-wire braking and steering, cutting out the need for bulky mechanicals.

The Treo might be just what Jeep needs to give sales a much-needed boost, especially outside the US. Clever, tough and cute, it could be the smartest move the firm ever makes...