You might be surprised to learn that British hot hatch buyers purchase 50 per cent of all Renaultsport cars produced. The tuning firm's work on the Clio is in demand among driving enthusiasts here, so it is good news that the plant which assembles the cars is only a short hop across the Channel in Dieppe. 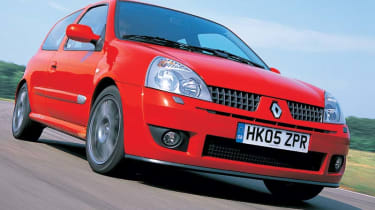 Renault has saved the best until last. The Clio Trophy might cost over £1,000 more than the standard Cup model, but its clever suspension and damping ensure buyers who value focused driving dynamics won't be disappointed. This is the final Clio of its kind - and the French company will have no trouble finding homes for the 500 models it's producing.

You might be surprised to learn that British hot hatch buyers purchase 50 per cent of all Renaultsport cars produced. The tuning firm's work on the Clio is in demand among driving enthusiasts here, so it is good news that the plant which assembles the cars is only a short hop across the Channel in Dieppe.

With production of the current hot Clio ending in September, fans are being offered a limited-edition Trophy model - and virtually all of them are heading to our shores. The newcomer is marked out by its bright Capsicum Red paint and new Trophy logos, and only 500 cars will be available.

A larger, wider, Clio V6-style rear wing sets the Trophy apart, while inside a plaque mounted on the seat runner proudly shows the production number. The Recaro sports seats are also new, and mounted a little lower than those in the standard Cup variant. This ensures a better driving position, and banishes the traditional Clio problem of limited cabin space.

That said, the steering wheel lacks reach adjustment and is mounted at an upright angle, so tall drivers will still have cramped legs and stretched arms after a long journey.

The seats are hugely supportive, however - and this is just as well, as the Trophy's suspension has been honed to provide even more grip in corners. New dampers, supplied by German firm Sachs, are similar to those fitted to race cars and even have a separate remote oil reservoir, allowing for better suspension control over bumpy roads. What's more, the ride height has been lowered by 10mm and the springs are now stiffer by 20 per cent at the front and 15 per cent at the rear.

The 180bhp 2.0-litre powerplant is unchanged, and continues to deliver impressive performance. The engine note is sporty, with a noticeable change in pitch at 5,000rpm, when the variable valve timing kicks in. It is just a shame the gearshift is so rubbery.

While the Trophy's ride is firm, the newcomer does not feel any more uncompromising than the standard Cup. There is more grip, though, with the chassis providing greater control at speed. On the test track, the Trophy will lift its unloaded rear wheel into the air before front-end traction gives way to understeer.

The nose of the car can be adjusted easily with small throttle adjustments, and rear end stability is excellent. And although the steering still suffers from artificial weighting and the powerful brakes can feel a little soft underfoot, the Clio Trophy is a highly accomplished hot hatch on the road and track.