Even if you drive the toughest 4x4 on the planet, there is still one thing that will stop you in your tracks - deep water. While scaling mountains, descending steep hillsides or even crossing shallow rivers represents an easy afternoon out for many off-roaders, when it comes to getting really wet, a very special kind of machine is required. 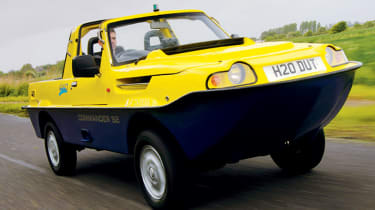 The fact Dutton is the world's only successful amphibious car maker says a lot. The S2's rugged Jimny mechanicals give it a sturdy base, while its conversion to boat has to be seen to be believed. Trouble is, not many people need to drive into a lake, and fewer still will pay £30,000 to do so. However, it's hard not to be impressed by the Dutton's true go-anywhere abilities.

Even if you drive the toughest 4x4 on the planet, there is still one thing that will stop you in your tracks - deep water. While scaling mountains, descending steep hillsides or even crossing shallow rivers represents an easy afternoon out for many off-roaders, when it comes to getting really wet, a very special kind of machine is required.

And that's where Dutton comes in. The British firm has been making amphibious vehicles for the past 11 years, and it's just launched its latest model. Auto Express took the plunge...

Up until now, Dutton has based its amphibious car on Suzuki's Samurai, a model not sold here since 1996. However, now that production of the basic off-roader has finished, Dutton, which has its HQ in Littlehampton, West Sussex, is using parts from the more modern Jimny for the Commander S2.

The little Suzuki's mechanicals are mounted on to Dutton's own monocoque structure, which replaces the rust-prone bodywork with a Glass Reinforced Plastic (GRP) hull and deck. Inside, the Jimny's dashboard remains, as do its four seats, but there are a few extra agricultural levers and controls to get to grips with. Approaching water, the driver must disengage the Suzuki's specially modified 4x4 transfer box to disconnect the engine and transmission from the wheels. The fully enclosed eight-inch propeller is then driven by the 1.3-litre engine, and begins to spin.

All that's left to do is to slide gracefully into the lake, with a specially sealed bonnet stopping water from entering the engine bay. Once you are off dry land, the motor powers the prop through third or fourth gears, revving at around 2,000rpm to give a top speed of 6mph. Progress is leisurely and noisy, but it's very hard not to fall for the Dutton's unique charm.

When on the water, a special fan keeps the engine cool, while there's no danger of the cabin springing a leak, thanks to specially made doors. These can be opened above the water line, so that you can get into the Dutton if it's parked up at a jetty.

What makes the S2 even more special is that it has all the off-road ability of a standard Jimny. That means even steep river banks are passable. Simply cruise up to the shore, engage drive to the wheels and the amphib-ian scrambles out of the water. The modifications add around 200kg to the Jimny's weight. Although the steering is permanently connected to both the wheels and the propeller, the Dutton is quite capable on the road, too, proving rugged and versatile enough to help it keep up with more conventional vehicles. Just don't expect modern-day refinement, though.

If you want to purchase your own Commander S2, prices aren't cheap, starting at £29,995. Hard or soft-top weather protection costs extra, so you'll need deep pockets to drive on land and water and stay dry at the same time. Amphibious vehicles are arguably both compromised cars and sluggish boats, but that's missing the point. The Dutton's got a party piece that few others can match, and makes a splash wherever it goes.