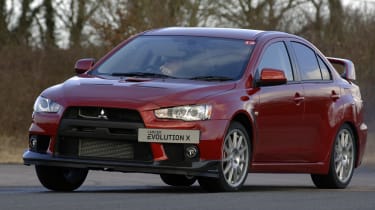 Those who were worried that the Evo may have gone soft can relax. It’s not quite as hardcore as the outgoing model but the X is still an aggressively quick machine that will put a grin on your face every time you get behind the wheel. But crucially it’s now easier to live with day to day. It’s truly the ultimate supercar chaser.

X marks the spot for performance car drivers! It’s been a long time coming, but the tenth incarnation of Mitsubishi’s legendary Evo has arrived in the UK.

With a hardcore image that owes much to its WRC cousin, Mitsubishi’s Evo X is ready. Over the years the spoilers have got bigger and the exhausts wider – and today the firm hopes the Evo will be a genuine alternative to the BMW’s M3.

Now 16 years after the badge was first introduced the Japanese firm is launching an all-new model – the Evo X. It describes it as more mature, more stylish and more sophisticated – but does that mean the Evo has gone soft?

Well it has certainly grown up. Bigger than it’s predecessor, it’s not a hugely radical change in design, retaining the same four-door saloon profile, but now looks more sophisticated. The jet fighter inspired nose gives it plenty of road presence while the flared wheelarches and short overhangs add to the sporting feel.

The old car could be accused of looking a little like it had every aftermarket accessory thrown at it, but thankfully the X is far more subtle. All models get stylish 18-inch alloy wheels, a rear diffuser with twin exhausts while the 360 has a carbon lip spoiler and the sharks tooth roof spoiler. Weight is reduced by the use of aluminium for the bonnet, wings and roof.

It’s far more distinctive than the latest Impreza and the interior is better too. It’s by no means premium, but the soft touch dash top and neat switchgear, along with the three-spoke steering wheel give it a modern feel.

But what this car is all about is performance, and in this area the newcomer excels. It’s available in three versions – the FQ-300, 330 and 360 and even the entry-level model with 290bhp accelerates from 0-62mph in just 4.7 seconds. The big news is that this model is also available with Mitsubishi’s new SST – or Sport Shift Transmission.

This dual clutch system, similar to Volkswagen’s DSG, can be used as a full automatic or as a sequential manual gearbox. This allows the driver to choose between normal, sport or super sport settings – which makes the changes lightning quick. Indeed it’s one of the best semi-automatic boxes we’ve ever tried.

The more powerful variants of the Evo are available solely with the new five-speed manual gearbox, but despite the lack of a sixth ratio it still makes the most of the car’s superb MIVEC engine. The unit is an absolute gem and as you’d expect delivers breathtaking performance – 0-62mph takes just 4.1 seconds in the range-topping FQ-360 – that’s faster than the Aston Martin DBS. As you’d expect, acceleration is savage, but even when pushed hard the Evo isn’t as unforgiving as before.

Of course it’s no wallflower. The ride is firm and the suspension settings suitably stiff, but it’s far better than it’s predecessor. Mitsubishi has got the balance just right here – it feels composed enough to use everyday, but still hardcore enough not to alienate diehard fans.

This hasn’t been at the expense of handling, though. The newcomer is fitted with super-all wheel control, or S-AWC for short. This system incorporates stability and yaw control along with an active differential – although it can be a little intrusive at times.

Pitch the Evo into a bend and the amount of grip is staggering, while body roll is kept to a minimum thanks to a wider track, longer wheelbase and 40 per cent stiffer body shell. It’s amazingly surefooted and equally agile while the nicely weighted steering provides excellent feedback, with less kickback over uneven surfaces.

Just like its predecessor, the Evo X offers a hugely enjoyable driving experience, and can finally offer a package to rival the likes of the BMW M3.

You’ll have to wait if you want one though. Dealers have already sold out of cars until May. But if you’re after supercar rivalling performance at a fraction of the cost – prices start at £27,499 for the GS FQ-300 – the Evo X is the ultimate choice.

Rival: Subaru Impreza WRX STi The new Impreza has received a mixed reception since it was launched – the saloon shape has been abandoned and it’s now only available as a five-door hatch, but it lacks the aggressive looks of the Mitsubishi. On the plus side it is cheaper then the entry-level Evo, but can’t match it for speed.