Will new mini-MPV prove a hit with Brits? 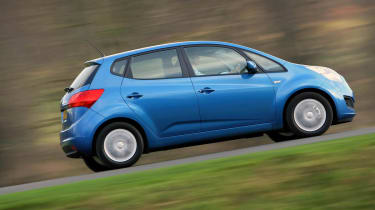 The Venga sums up Kia’s growing confidence. It’s a bold and intelligent move into the growing mini-MPV market, and will surely pay off. The design is very well executed and the interior tardis-like – but the driving experience ultimately disappoints. For the best value, stick to the cheaper petrol cars, from £11,495– and don’t forget, Kia’s seven-year/100,000-mile warranty is included.

The Venga is coming... to the UK! We’ve already driven Kia’s new Ford Fiesta-sized mini-MPV in European spec, but in recognition of the importance of the British market, the firm has retuned the car for our roads.

To cope with bumpy tarmac, and potholes, the suspension has been tweaked with a new set of softer dampers, although the springs remain the same. The electric power-steering also gets a firmer setting, to create a chunkier, big-car feel.

As a result, there is relatively little body roll in corners, while imperfections in the road are rounded off reasonably well. The overall driving experience is uninspiring, yet the styling looks great, and ties in neatly with other new Kia models, the Sorento and Sportage.

The Venga’s wheelbase is 65mm longer than that of its stablemate, the Soul, so the interior is spacious. Fold the sliding rear seats flat and there’s a generous 1,485 litres of load space to play with, too.

We drove the 89bhp 1.4-litre diesel, which gets stop-start and Kia’s EcoDynamics badging. It promises 60mpg-plus, yet still trails the Fiesta ECOnetic. Plus, the engine lacks the punch you expect from low revs.

Rival: Vauxhall Meriva We have yet to drive the new Meriva, but it looks promising. Rear-hinged back doors and a flexible interior will make it a force to be reckoned with.