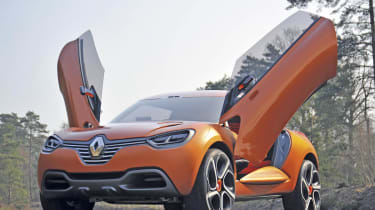 We love the Captur’s radical styling, and have been assured that the front end will carry through to the production model virtually unchanged. Even though the scissor doors and quirky interior will be left behind, the Renault has the kind of head-turning looks most manufacturers can only dream of. If the car comes with the firm’s promising range of downsized engines – including the twin-turbo 1.6-litre diesel envisaged for this model – it should have the performance and green credentials to match the stylish design. And with Renaultsport engineers working their magic on the chassis, the Captur’s sporting character could be assured.

It’s Renault’s answer to the Range Rover Evoque. The Captur was unveiled at last month’s Geneva Motor Show, and follows on from the all-electric DeZir sports car. It previews a future small crossover that will be based on Nissan’s Juke – and Auto Express has driven it.

As we reveal on Page 15, the Captur is the second model in a series of six ‘life’ concepts, with the DeZir representing love, the Captur exploration and the R-Space (driven on Page 36) family. We reckon the design is as striking as the Juke’s. Curvy lines and a face borrowed from the DeZir will both find their way on to the production car, but the scissor doors, matt-finish wings, rear-facing cameras and huge 22-inch wheels will be left behind.

Interestingly, Axel Breun, head of concept car design, says the two-door layout is likely to be offered when the car makes showrooms, in an effort to bolster the Captur’s sporting credentials. Inside is a typically futuristic layout, with the seats made of stretchy bungees. The rear chairs fold out from the sides of the car, and when not in use allow for a flat load area or hammock.

Little of what makes up the interior will ever follow through to a production model, but the spacious feel and high driving position reveal why Renault is so keen to introduce a car into this segment. The Captur features a futuristic sat-nav, called VisioDrive. This projects navigation information on to real-life pictures of the road ahead, transmitted to the cabin by forward-facing cameras.

In addition, the newcomer boasts a hi-tech powertrain – or at least, it should! Renault envisages the Captur will eventually feature a twin-turbocharged 158bhp 1.6-litre dCi engine. We have tried the 128bhp single-turbo version of this motor, and with a broad range of torque and smooth running, it will be perfect for cars of this size.

Officially, the firm claims the Captur will be able to cover 0-62mph in eight seconds while emitting only 99g/km of CO2. And although the car is front-wheel drive only, Renault’s innovative RX2 system – which can apportion power to either of the driven wheels if one loses grip – should help with off-roading. From behind the wheel, the Captur feels like a one-off concept. A lack of sound deadening means a huge amount of engine noise, while the suspension is very firm. But none of this matters, as it has no bearing on how the final car will handle. And with the production model’s chassis borrowed from the Juke, we can expect an agile supermini-SUV complete with head-turning looks – and a cut-price Evoque experience.

Rival: Nissan Juke Renault’s alliance partner introduced the boldly styled Juke last year, and while it’s not as exciting to drive as it is to look at, the car has still proven a big success. Bosses at the French firm will be keen to tap into these sales as soon as possible.