The controversially-styled new addition to the MINI range promises to be the best handling yet, and we've driven the flagship JCW on track 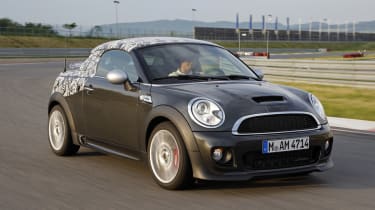 From the first few corners it's obvious that the MINI Coupé is designed to offer the ultimate in driving thrills, and despite the harsh ride, the in-gear punch from the twin-turbo engine is hugely addictive. The original 'jet-helmet' style roof won't appeal to everyone though, and MINI's aggressive pricing strategy means that the top-spec machine is likely to cost close to £25,000 - puts it up against some very serious rivals indeed.

So is this the first MINI that's a real man's machine? According to the brand that's exactly who the new Coupé is aimed at - and it’s also touting it as the firm’s sharpest handling model ever.

Auto Express got behind the wheel of the flagship John Cooper Works version to see if the newcomer is a worthy addition to the range.

Sitting nearly three inches shorter than the standard hatch, the Coupé squats low to the road, and the sweptback roofline gives the driver a sporty view from the cockpit.

Despite this there's still enough headroom thanks to the ultra-low slung driving position, and some hidden extra inches of space beneath the new roof. The rest of the cabin is carried over from the rest of the MINI line-up, and iconic touches like the retro toggle switches and large central speedo all remain unchanged.

Although we were only able to test a camouflaged version, the looks stay very close to the concept car, with dramatically curving C-pillars and  - for the first time on a MINI - a retractable spoiler that automatically pops up at anything over 50mph.

The Coupé is only available with the most powerful petrol and diesel engines at MINI’s disposal, so as well as the frantic 208bhp 1.6-litre twin-turbo unit in the John Cooper Works, there’s also the 182bhp Cooper S, 120bhp Cooper and newly introduced 141bhp Cooper SD.

The twin-turbo is a fantastically eager powerplant, revving smoothly and quickly in any gear, and propelling the coupé from 0-62mph in just 6.4 seconds - a tenth quicker than the hatch can manage. Yet thanks to the compact body it's also surprisingly economical, with close to 40mpg combined and C02 emissions of just 162g/km.

However at the track it takes some highly committed driving to spot the differences between the Coupé and the standard hatch in terms of handling. The slightly stiffer set-up of the coupé means that there’s less initial body-roll on turn in, and greater stability when you’re at the limit, but these differences are marginal, and it’s actually the Coupé’s added practicality that separates the two cars.

The cramped rear seats have been removed, freeing up an extra 120-litres of boot space, plus additional storage bins behind the front seats. Prices have yet to be confirmed, but whether these small changes and the racier looks justify what is likely to be a higher price is hard to say.