Muscle car legend is back with a bang, and we take the reins 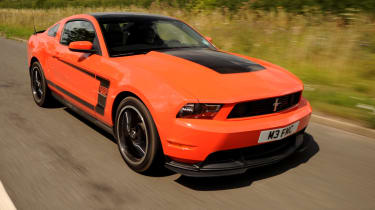 The Boss may be quicker around Laguna Seca than an M3, and far cheaper, yet in virtually all other respects it’s outclassed. That said, we still love it. Yes, it’s only available in left-hand drive, there’s not much in the way of equipment and cabin quality is poor, but the V8 provides storming and addictive performance, while the whole car oozes character.

Ford is taking on the BMW M3, and it’s pulled out the big guns to do so. This is a reborn version of the famous 1969 Boss Mustang 302 – and the American firm claims the car can lap California’s Laguna Seca race track a second quicker than BMW’s supersaloon.
The newcomer will certainly turn more heads than the M3. The bright orange paint and black decals are trademark features of the original Boss, and there’s a subtle bootlid spoiler and more aggressive nose, too.
Inside, there’s less kit – sat-nav isn’t even an option – but you do get an Alcantara steering wheel, retro gearstick and Boss 302 badging on the seats and dash. Some materials, including the door trims, are scratchy, and certain parts of our car’s interior already looked worn. So the Boss definitely falls short of the BMW in terms of kit and build quality.
Yet it impresses on the move. It’s based on the 5.0-litre V8 Mustang GT, but gets an extra 32bhp – for a total of 438bhp – as well as new quad exhausts, adjustable suspension and larger anti-roll bars. There are also upgraded Brembo brakes.
The 0-60mph sprint takes 4.6 seconds and the Mustang pulls hard all the way to the 7,500rpm red line. It makes an incredible noise, with a bassy roar under heavy throttle and a burbling exhaust. Things get even better when you insert the separate TracKey into the ignition. This changes 200-plus engine parameters, transforming the Boss into a hardcore racer. The throttle becomes extra-sensitive, the noise moves up a level and the car shakes even at idle.
The Boss handles well, too. Independent rear suspension isn’t among the upgrades over the standard GT, meaning the car can feel unsettled through bumpy corners thanks to its live rear axle layout. But it resists understeer well and with all that power on tap, you can easily slide the tail with a hard press of the throttle. The steering can feel vague at times, but it’s still a lot of fun. For Americana fans, this is one of the finest Mustangs in years. Once imported, the LHD model will cost about £40,000, which makes it £15,000 less than the M3. Yet the latter still wins out for kit, build quality and driving dynamics.
Share this on TwitterShare this on FacebookEmail