Made in Indiana, but wearing a Japanese badge, Subaru’s Tribeca sounds like one mixed up 4x4... 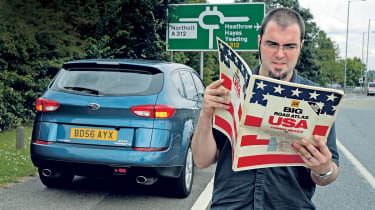 America. The land of the free and the home of the brave. And from my experiences behind the wheel, that’s where our long-term Subaru Tribeca most wants to be.

Yes, it’s built by a Japanese manufacturer, but the Tribeca fits the brief for a large SUV so well, it’s like a model from across the pond. And there’s more to the Subaru’s Stateside connection than first meets the eye.

For starters, it’s named after a stylish neighbourhood in New York City. Then there’s the fact it proudly wears a sticker in the rear window that says it’s assembled at the Subaru plant in Lafayette, Indiana. The mid-west factory can be pleased with its work, as the Tribeca has a solid feel, while the cabin is quiet and comfortable.

This is a major factor in the Subaru’s main talent: motorway cruising. My commute involves plenty of high-speed miles, and it’s here that the Tribeca shines. Wind noise is minimal, while the suspension absorbs surface imperfections well, although it’s more fidgety on city roads.

Inside, the futuristic cabin feels light and airy, but passenger space isn’t as good as in other seven-seat SUVs. The rearmost chairs are only big enough for toddlers, while the middle bench is also rather tight.

Still, passengers in the back get air vent controls, and can while away long journeys watching films on the roof-mounted DVD player. There are also three 12V sockets to plug portable devices into, while the armrest cubbyhole has a socket to take an MP3 player.

For all its talents, though, the Tribeca’s major bugbear – and another of its Americanisms – is its thirst. The six-cylinder engine is smooth, but as we have reported in the past, the way it drinks fuel is astonishing. Its trip computer shows the Subaru is averaging an appalling 19.8mpg, while our own calculations back this up, with a slightly better figure of 21.2mpg.

With the Tribeca’s 10,000-mile service imminent, we will see if there’s anything that can be done to improve fuel consumption. In the meantime, Subaru’s SUV will have to continue flying the flag for all-American motoring in the UK…