The 1990 Ford Escort did not have the best start in life. Criticised for being dull in comparison to rivals, it was slated for having inferior dynamics, a dull design and patchy build quality. 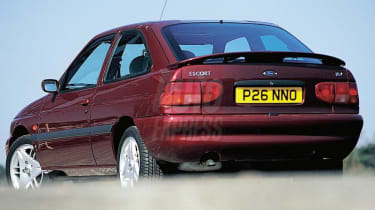 The 1990 Ford Escort did not have the best start in life. Criticised for being dull in comparison to rivals, it was slated for having inferior dynamics, a dull design and patchy build quality. Yet by 1995, following its second facelift, the Escort had evolved with an improved chassis, different steering and suspension set-ups and a curvier front end which gave a neater appearance. Today, the late-model Escort is a fine choice if you want inexpensive family transport. There are lots of used exam- ples for sale, and prices are keen. But be picky, as there are enough bad ones to mean you could get stung, and some models - notably normally aspirated diesels, base Encores, and those with four-speed gearboxes - are undesirable.Checklist * Steering: front track control arms take a battering, especially if the car has hit kerbs. Replacement is relatively straightforward, and will set you back about £20. * Suspension: rear tie bars - which stop the rear hub from moving on its stub - can rot if neglected. Look under the sill towards the rear of the car and you'll spot them. * Engines: most are hardy, with OHV 1.3s especially reliable. Beware of smoky 1.6 or 1.8-litre units, as they're prone to sticking valves. Diesels need cambelt changed at every second service. * Electrics: check for water in the fuse box. as the surround rots and lets in moisture. Rear wipers can fail, but will spring back into action if you clean the contacts. * Bodywork: prone to rot, although it's usually cosmetic rather than structural. The worst affected areas are the rear wheelarches, which have a lip that collects dirt.Driving Impressions Unless you opt for a sporty RS2000, don't expect great driving excitement from the Escort. Later cars were much better than the earlier ones in terms of dynamic ability and, by the time production ended, the Ford was a reasonable machine. All versions have a slick gearbox and light steering.Glass's View It might be forgotten by new car buyers, but the Escort still performs well on the used market. People view the car as a safe purchase, and the fact that it's much cheaper than the equivalent Focus makes it look tremendous value. The best buys are the last-of-the-line Finesse models, which are very generously equipped. Prices are low because you can buy a Focus of the same age, but with the Escort you'll get a lot more for your money, especially if you opt for the estate. Jeff Paterson, Snr Cars Editor, Glass's GuideLife With An Escort My Escort is a 1.8 Ghia X model which has leather, air-conditioning and all the toys. I can't think of another car in the same price bracket which can offer so much kit for the money. Tom Marrison, Buxton, Derbyshire I can't complain about my Escort estate's practicality, but it's not a great car to drive and the diesel engine is particularly sluggish. Dennis Allthwaite, Radcliffe, Lancs

Ford has got it right at last. The Escort has never been renowned for its handling, with a nose-heavy stance and unrewarding attitude. A drive in a Peugeot 306 or Citroen ZX highlights the previous car's shortcomings. But the 1995 model has been radically improved. The front tyres cope well with the power, although the steering still lacks feel and the engine sounds harsh. There are rivals that are better to drive, but this is the best Escort yet.