Executive luxury has never come as cheap as this. Thanks to Renault, you can get your hands on a BMW 5-Series rival for £13,000. The French firm's unloved Vel Satis may not be the most obvious choice for businessmen on the move, but there are benefits. 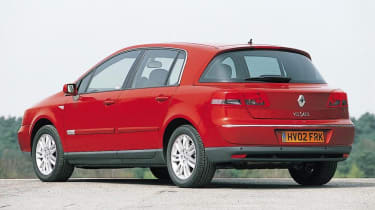 Executive luxury has never come as cheap as this. Thanks to Renault, you can get your hands on a BMW 5-Series rival for £13,000. The French firm's unloved Vel Satis may not be the most obvious choice for businessmen on the move, but there are benefits. Firstly, it looks like no other competitor - and secondly, rampant depreciation ensures early examples cost less than a brand new family car. As well as that unique styling, what makes the Renault desirable is its luxurious, lavish cabin. Standard equipment levels are equally impressive, while there is indulgent space for five. Ignore petrol models unless they're cheap and go for a diesel. The 2.2 dCi is fine and will return 40mpg. But the 3.0-litre V6 dCi is a stunner, providing speed, economy and refinement. Look out for electrical niggles, and be ready to hunt as used examples are rare.Checklist * Interior: numerous faults can arise here, so check the climate and cruise control systems. Also, examine electric windows, auto wipers, switches and instrument panels. * Engines: fuel injection sensors can fail on 2.2-litre dCi. ECU and electronic parking brake faults are common - as is keycard start trouble, but a 'spare' is hidden in the card. * Gearboxes: diesels' clutches wear fast and gearshifts stiffen - new boxes are often needed on the mechanically identical Laguna. V6 models available with reliable auto only. * Bodywork: investigate bumpers for parking damage as the Vel Satis is large and scrapes are common. Lack of model identification makes it difficult to decipher trim levels. * Tyres: most regular fault concerns tyre pressure sensor display in the dashboard. Spurious messages are very frequent, and punctures sometimes demand a new sensor, costing £75, including fitting.Driving Impressions THIS is a tall car with soft suspension, and certainly isn't built for twisty roads. The Vel Satis is capable enough, but its natural environment is straight tarmac - the bumpier the better if you want to be impressed by its smooth ride. The controls are light and easy, too, and the diesel engines provide effortless motoring. While the 2.0-litre petrol is a little gruff, the 3.5 V6 is fun, albeit thirsty. Enormous front seats adjust in every direction, with the backrest splitting for optimum comfort. But the car's biggest strength is its refinement.Glass's View Despite its distinctive styling, new and used car buyers have failed to identify with the Vel Satis. It competes in a sector of the market that's been diminishing steadily for a number of years, and as a result it has sold in very small numbers. Its limited availability has done little to keep values firm, either. However, rapid depreciation means good news for the used car customer who is looking for excellent value for money. The diesel versions make the most sense. Jeff Paterson, senior editor, Glass's GuideLife With A Vel Satis The Vel Satis is a proper French car. It's an expression of style over sensibility, and one which I am proud to drive. I'll have to keep it a long time, though, as otherwise I'll lose too much money when I come to sell." Henri De Maupin, Lewes, East Sussex I'm glad my Vel Satis is a company car, so I avoid the depreciation hit. It attracted me because it was different, but it hasn't been very reliable. Martin Gurney, Bolton, Lancashire

Renault's flagship is very big and very clever, but is it a step too far? The firm's ambitious move into the luxury market with the Vel Satis has certainly raised eyebrows. Pitching it into 5-Series territory is a bold act - particularly when you consider the Renault's premium price and the excellence of the German offerings in this sector. But if the comfortable cabin, luxurious trim and smooth engines are anything to go by, the Vel Satis deserves every chance it can get.