Legendary Toyota reliability and quiet as a mouse. How does the Avensis compare to the Passat? 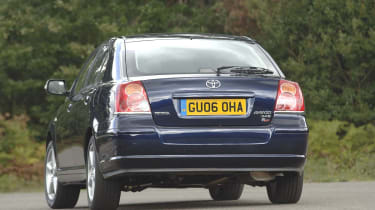 If there was an award for most anonymous family saloon, the Avensis would be a strong contender. Toyota has tried to remedy this with a recent facelift, but the result is best described as subtle. Restyled headlights and a fresh grille are the only noticeable changes, while the indicator repeaters have been moved to the side mirrors, echoing those on the Passat.

It still blends into the background, though, and the traditional saloon proportions manage cleverly to disguise the fact that this Avensis is actually a hatchback. Nevertheless, its rear cabin feels cramped and gloomy, with less leg and shoulder room than the Passat offers.

But with the seats in place, the boot is 25 litres bigger than its rival’s, and its versatility trumps that of the VW. It is possible to fold and tumble the seats to give a flat-floored load space totalling 1,320 litres. Sadly, though, the cabin design is as bland as the exterior styling. Toyota has altered the centre console to bring it up to date but, despite the revisions, it’s dull and looks outmoded compared with the smart VW.

While build quality is top notch, the plastics feel cheap to the touch and the finish isn’t especially precise, either – minor aspects such as the flimsy central storage lid and protruding cup-holder are prime examples of this. Full leather seats are not available, and the Avensis makes do instead with a mix of hide and Alcantara. Still, at least the chairs are electrically adjustable.

Toyota says the mid-life revisions also include reworked steering and suspension, plus greater body rigidity. The changes are intended to im­prove cornering and ride, and the latest Avensis is certainly better in this respect than its predecessor.

Unfortunately, it is still not up to class-leading standards. The steering is too light and lacks any feel, so there is precious little driver involvement. On long motorway trips, it settles into a relaxed cruise, but it doesn’t handle back roads particularly well and the ride feels stiff at speed. With 400Nm of torque, you’d expect the Toyota to pack a punch. Yet despite its light weight and good aerodynamics, it fails to make a big impression.

Against the clock, the Avensis proved marginally slower than its rival, and the engine didn’t have the same bite or low-rev urge. Still, this could have something to do with the fact that our car had covered less than 2,000 miles.

On the plus side, the engine is well insulated so that, at speed, the only distraction is the intrusive wind noise. The Avensis is pretty relaxed when driving around town, too, even if the slack gearchange doesn’t like to be rushed.

The new flagship T180 trim represents good value, and includes a CD changer and turn-by-turn sat-nav. There are nine airbags to keep you protected... but is that enough for the Avensis to take the honours in the family car class?

Price: £21,515Model tested: Toyota Avensis D-4D T180Chart position: 2WHY: Boosting the Toyota’s lacklustre image is a 2.2-litre D-4D unit borrowed from the Lexus IS220d. It packs a punch and is more powerful than the Passat’s diesel. This model is given its own flagship trim – T180 – and narrowly undercuts the VW on price.

Official figures list the Avensis as the more economical car, but it actually proved slightly thirstier at 41.9mpg. The tank is 10 litres smaller, so you’ll have to refuel 100 miles sooner than with the VW.

Toyota’s reputation for reliability stands the Avensis in good stead, and the T180 has the range’s best residuals, at nearly 41 per cent. But that bland image stops it from doing as well as the VW.

The D-CAT system helps to maintain low emissions of 161g/km, putting the Toyota in the 22 per cent bracket. A slightly lower list price makes this the cheaper choice for company car owners – just.