The Passat has one immediate advantage over its rival: the badge 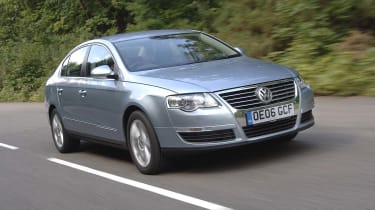 Badge snobbery makes a really big difference to some buyers, who associate the German brand with quality, reliability and an upmarket image.

Whether you agree with badge snobbery or not, there is no denying the latest four-door manages to bridge the gap between family car and compact executive saloon.

Much of that is down to the styling. As well as being inspired by the luxury Phaeton, the Passat resembles VW’s latest model, the Eos coupé-convertible, at the front. The simple, well executed lines also manage to hide the car’s size – as well as being considerably larger than the previous Passat, it’s longer and wider than the Avensis.

As a result, rear passengers are particularly well catered for, with ample head, leg and shoulder room. Unlike the Avensis, the Passat allows three adults to travel comfortably in the back. And while it doesn’t have the versatility of the Toyota’s hatchback, the four-door VW has a generous boot, and the split/fold rear seats boost space.

The airy cabin has class-leading fit and finish, while the textured plastics look good. It’s a very pleasant place in which to spend time, and the leather sports seats – stan­dard on this model – offer excellent support. Our only real gripe is with the electronic handbrake. Granted, it frees up space on the centre console, but it’s not easy to use for hill starts or during tricky parking manoeuvres. But that is only a minor niggle, considering how comfortable the Passat is. The ride is smooth in town, and even better at motorway speeds, making the VW an effortless cruiser.

Twisty tarmac can unsettle the rear suspension and it’s not a remarkably entertaining driver’s car, but the well weighted steering inspires more confidence than its rival.

The centrepiece of both cars, however, is the engine rather than the chassis. In the past, we’ve criticised VW’s unit for being too highly tuned and peaky, and that’s still the case. Power isn’t delivered as effortlessly as it is in the Avensis, so it’s harder to drive smoothly. A long second gear doesn’t help, either. It’s also noisier than the Toyota’s larger 2.2 D-4D and, in theory, produces less power. Those points aside, the German saloon has the upper hand.

Peak torque of 350Nm is delivered 250rpm earlier, so the 2.0-litre motor is more responsive low down. It packed a bigger punch during our in-gear tests, resulting in marginally better outright acceleration times for the Passat. Not bad at all, given that the 1,723kg saloon is more than a quarter of a tonne heavier than the Avensis.

You might not expect the VW to be as well equipped as a comparable Toyota, but that’s not the case here. The SEL has leather seats, rain-sensitive wipers and stability control; only the Avensis’s sat-nav is missing from the Passat.

Price: £21,735Model tested: Volkswagen Passat 2.0 TDI 170Chart position: 1WHY: The Passat is our reigning family car class champion, thanks to its blend of comfort and space, low running costs and solid build. There’s a choice of seven engines, as well as four trim levels, and here we test the flagship diesel in range-topping SEL trim.

The maker claims the higher-output 2.0 TDI should return 46.3mpg on the combined cycle. It didn’t quite hit such levels with us, but 42.3mpg is still impressive. A larger tank gives the Passat a 650-mile range.

Family cars don’t fare particularly well in this category. Despite being the newest model in the line-up, the higher-output 2.0 TDI is among the poorer performers in the range, losing 58 per cent of its value.

A variable schedule decides when the VW needs to be serviced. The diesel can potentially travel for 30,000 miles or two years without a major check-up. We were quoted £710 for the first three visits.

Despite having a smaller output, the Passat emits similar CO2 to the Avensis and sits in the same tax bracket. Lower-band owners will pay £1,052 a year, while their more wealthy colleagues fork out £1,913.