Nip and tuck makes the Czech five-door even more efficient. 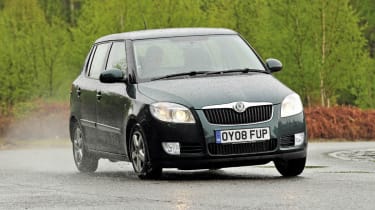 If ever there was a model ripe for a green makeover, it’s the latest Fabia. While sister company SEAT has a sporty image, Skoda has built its reputation on practicality and affordability – two strengths the Fabia has by the bucket load. And as the GreenLine version is the most fuel-efficient car the firm has ever made, it should appeal to core Skoda buyers.

So it’s a surprise that the model has missed the magic sub-100g/km CO2 emissions target that would see it qualify for free annual road tax – especially when you consider that its VW Polo Bluemotion and SEAT Ibiza ECOmotive sister models both put out a mere 99g/km.

All three superminis are powered by the same three-cylinder 1.4-litre TDI engine, fitted with a diesel particulate filter. But as the Fabia weighs 36kg more, at 1,120kg, it’s the least efficient of the trio, emitting 109g/km of CO2 and using more fuel. What’s more, the Czech model’s extra bulk makes it slower than its two stablemates.

Equipment has a big part to play in emissions – the more kit a car has, the more power is required to run it. Yet even this doesn’t give the Skoda any excuses. It comes with air-con as standard, but so do the Ibiza and Polo Bluemotion 2.

So why would you choose the Fabia over the other two more frugal superminis in our test? Well, in nearly every other respect, the five-door is a better, more modern all-rounder.

It’s certainly the most attractive of the trio. The Skoda is also bigger and offers more passenger and luggage space.

The driving environment is better, too. Despite the ugly light grey trim, it’s upmarket, with clear dials and well laid-out controls. This is a far cry from the Ibiza, which has a budget car feel. There is little to distinguish it as an eco model, though – if you’re expecting hi-tech trip displays as seen in the hybrids in our test, you’ll be disappointed.

From behind the wheel, the GreenLine is as good as any other Fabia, with a grown-up feel in and out of town. The ride is comfortable and the supple suspension irons out rough surfaces with ease. The pay-off is excessive body roll through corners, while the steering is lifeless, but overall the Skoda is safe and composed. The Fabia’s chassis also seems to be affected least by running on narrow eco-tyres, which led to a shortage of grip in the Polo and Ibiza.

The buzzy three-cylinder engine has long been a fuel-sipping favourite, and in the GreenLine it’s mated to a long-ratio five-speed gearbox. Around town it’s difficult to detect any difference from a standard Fabia diesel, but when accelerating up to higher speeds, the longer ratios are noticeable, especially in fourth and fifth. This is a benefit on motorways, as the revs are kept low to increase economy, although it does mean progress can be frustrating on A and B-roads, as you find yourself holding a lower gear for longer. From the outside, there are again few hints about the Skoda’s eco credentials, aside from the GreenLine badge on the tailgate. While the aerodynamic changes aren’t as obvious as those on the VW, the Skoda is fitted with special panels underneath to reduce drag, while the front bumper has been raised by 35mm.

The GreenLine is clearly a step in the right direction – and it’s certainly a better choice than its two supermini competitors for buyers who value refinement and comfort. At only £290 more expensive than the equivalent Fabia 2 1.4 TDI, it’s well priced, too.

But that doesn’t disguise the fact that it’s not as green or as economical as its older rivals, which harms its overall score here.