When bosses finally revealed the XR2 in 1981, it became an instant hit with boy racers – and it certainly looked the part. 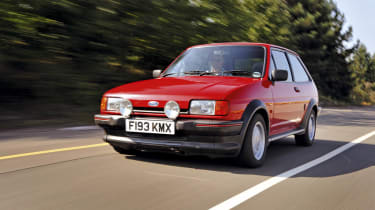 After Ford launched its innovative Fiesta supermini in 1976, it was only a matter of time before a hot version would appear.

When bosses finally revealed the XR2 in 1981, it became an instant hit with boy racers. With its unusual ‘pepper pot’ alloy wheels, lowered suspension and exclusive body graphics, it certainly looked the part. Sadly, the 1.6-litre motor produced only 84bhp, making fordisappointing performance.

So when the MkII appeared in 1984, it featured an all-new and – for the time – hi-tech 1.6-litre CVH unit that boosted power to 96bhp. It still wasn’t as rapid as a Volkswagen Golf GTI, but it was much cheaper.

Even today, the XR2 looks mean and purposeful. Its chunky wheelarches, extra foglights and red stripes on the bumpers mark it out as an Eighties classic.

On the move, it’s immediately clear how far car technology has advanced in the last two decades. The stiffly sprung Fiesta crashes over bumps, the brake pedal needs a healthy shove to produce any response and the lightweight build leaves you feeling vulnerable.

But it’s still fun. There’s a familiar hollow rasp from the eager engine and the XR2 displays surprising agility, despite its age. It’s not hard to imagine Eighties car fans falling for the Fiesta’s rough-edged charms and bargain price.

Vote for your favourite fast Ford here, in our exclusive reader survey